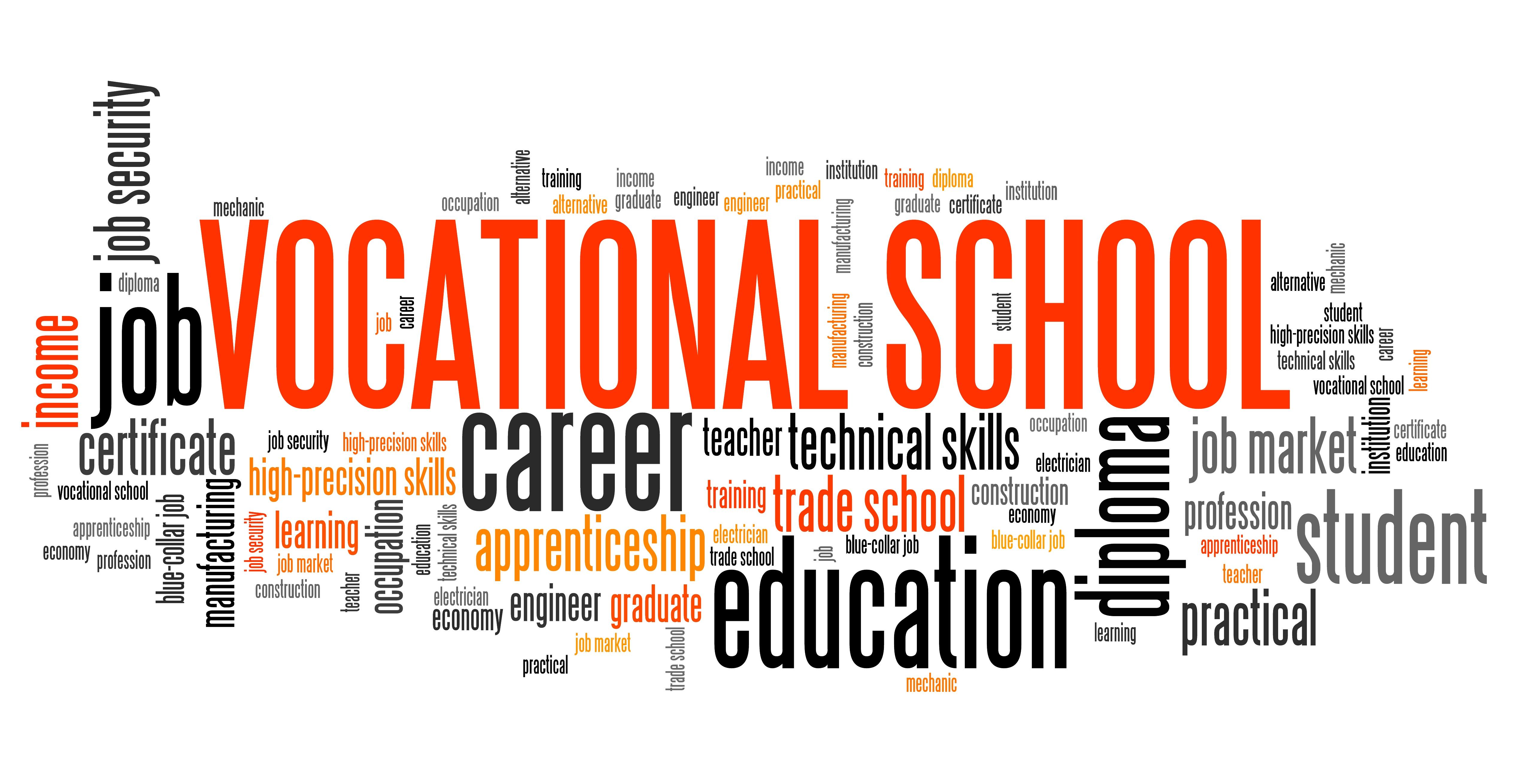 Employment and Earnings over the life course in Switzerland

Vocational education and training (VET) is known to ease the entry into the labour market by providing specific skills that are readily applicable in a given occupation. This type of education may enable young individuals to find a good match at the beginning of their career, but it may also leave older workers vulnerable to technological change and shifts in the occupational structure. On the other hand, holders of general education may face more difficulties when entering the labour market due to a lack of work-related skills but may be better rewarded after several years of experience due to the larger flexibility of general skills. To address this question, Maïlys Korber investigated employment and wages over the life course for holders of vocational education, and compared them with holders of general education, both at the upper-secondary level. A summary of the results is presented in this policy brief.

This study, conducted as part of the National Centre of Competence in Research LIVES at the University of Lausanne used data from the SLFS and SHP. The analyses are based on 24 annual surveys of the SLFS covering the years 1991-2014. The population studied is composed by respondents who were born between 1954 and 1966 and entered the Swiss work force in the 1970s and 1980s. In addition, for corroboration, analyses were also used from the SHP 1999-2015. Maïlys Korber looked at an individual’s labour market participation in terms of employment, i.e. being employed and at work income levels across the life span. A work rate participation of either 8 plus or 20 plus hours per week was used to denote employment. The study analysed the differences between individuals whose highest educational level was upper secondary education which accounted for 55% of the total population in Switzerland: 46% of VET workers and 9% of workers with a GE. The excluded groups in the analysis are twofold: those that finished their schooling at the end of compulsory secondary education (16%) and individuals with a tertiary education (28%). It should be mentioned that the initial transition rate to universities is high for students with a GE, namely around 95% for the cohort that graduated in 2012 (Babel, 2018: 6).

This study found that employability VET offered a slight employment advantage in particular for men across the life span and that older workers did not lose their edge in the labour market. Men who carried out VET had a substantial employment advantage over men with an upper secondary school GE until age 30. Thereafter, between the ages of 35 and 55 employment the employment rate for men is greater than 80 percent irrespective of their educational route. After 55, male VET workers continue to enjoy high employment rates whilst their GE counterparts diminish. Therefore, VET offers strong employment rates across the life span for men. An older birth cohort (men born between 1941-1953) was compared to a younger birth cohort (men born between 1967-1979) to see if there were generational effects and it was found that the employment advantage of VET held across these different birth groups. The VET advantage only lasts until age 30 when comparing them to men with a tertiary or university education and this latter age group typically enters the work force at a later age.

In contrast, an upper secondary GE afforded woman a slightly but not significantly higher rate of employment than their VET counterparts early in their careers, until age 40. Around age 40, female VET workers catch up and thereafter, enjoyed a slight but still not significant employment advantage. Overall, a woman’s employability is similar regardless of whether she followed the VET or GE path in upper secondary school. Women with a tertiary or university education also had the highest employment rates after age 30 until retirement.

Employment Rate for types of Education by Age 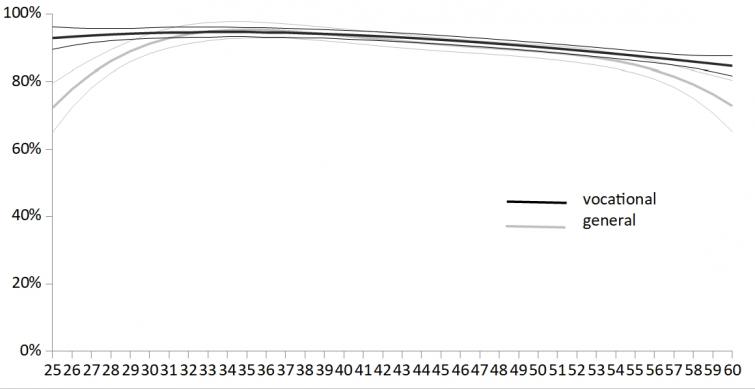 The relationship between VET and age is curvilinear: VET is beneficial for employment and earnings at the beginning of the career, in particular for men, but this positive effect decreases with age.

Earnings differentials increase over time: does the educational route matter?

Contrary to the findings for employment, general education offers a clear advantage in terms of earnings across the life course. Whilst vocational trained men and women begin their careers in their early twenties with higher annual earnings than those with upper secondary GE, there is a reversal of fortunes in their thirties which is particularly relevant to men. However, both groups earn well below the earnings of workers with tertiary and university education. Workers with GE have steeper life-cycle earnings than workers with VET and this continues during the life course whilst VET workers’ hourly earnings flat line in the second half of their careers. For women, the salary differences are even greater as already by age 26 they earn more than female workers with a VET. Therefore, the gap in hourly earnings widens over the life course in favour of workers with general education. By age 40, men earn 12% more and women 13% more per hour than their vocationally trained peers.

Within this study, VET was divided into 6 different vocational routes and further analyses were carried out to see if the GE advantage held across different occupations or whether the specific VET altered one’s wages. Whilst there were substantial differences in earnings across the different vocational fields, the conclusion remained unchanged: general education is associated with higher hourly earnings regardless of the VET field.

The nexus between education and labour market outcomes looks very different for men as compared to women. It is standard practice in labour economics to limit analyses to men and then extrapolate these results to the entire population (e.g. Hanushek et al. 2016: 7, Malamud and Pop-Eleches 2010: 44). However, this study shows that this would be misleading as employment rates for men are preferential with a VET whereas women’s employment is slightly higher if they have a GE. Employment-weighted earnings over the life course also showed clearer benefits for VET for men, whereas women obtain higher earnings with an upper secondary GE than with VET. In other words, Switzerland’s apprenticeship system offers men vocational degrees which are at least as attractive as a baccalaureate in terms of employment prospects and total earnings over the life course. However, for women, a maturité or baccalaureate clearly carries higher returns than vocational training.

This study shows that vocational training and education offers robust employment prospects across the life span. It has long been known that vocational training facilitates a smooth transition from school to work and guards against youth unemployment which can have deleterious effects on later employment prospect (DiPrete & Eirich, 2006: 287). During the decades surveyed in this study, vocationally trained workers did not suffer employment difficulties in the latter course of their careers but their earnings suffered in relation to their counterparts with a GE. This study centres on men and women who entered the work force in the 1970s and 1980s in Switzerland – a cohort which is possible to follow from the age of 25 to the age of 60 – which had relatively low levels of unemployment. Considering that the situation on the labour market constantly changes, it is an open question whether the comparison of the two groups will be similar or not for next cohorts.

An important question for public policy is how to reduce inequalities that emerge from different education and training paths. Workers with a tertiary or university education enjoyed the highest employment rates of all and offered an advantage to both the GE and VET trained workers in terms of employability and in relation to earnings. Facilitating access to tertiary education may thus be a way to reduce inequalities among holders of vocational and general education at the upper-secondary level. This is supported by our findings, which show the advantageous labour market situation of holders of vocational upper-secondary in combination with tertiary education. Pathways existing since the nineties from vocational upper-secondary to tertiary education may help decrease inequalities between older workers who either graduated from vocational education or general education at the upper-secondary level. Therefore, accessing jobs with higher wages depends less on the type of upper-secondary education. The study supports the recommendation that decision-makers for the VET programmes – Confederation, cantons and employers’ organisations – investigate the possibility to offer more general skills in addition to apprenticeships, during or after it. This would facilitate further training which would give workers to access better paid jobs or positions during their careers, and may also be a way for employers to keep employees working in their firms for longer. This is especially true in our society, where doing the same task for the same firm for one’s entire career is becoming increasingly less common.