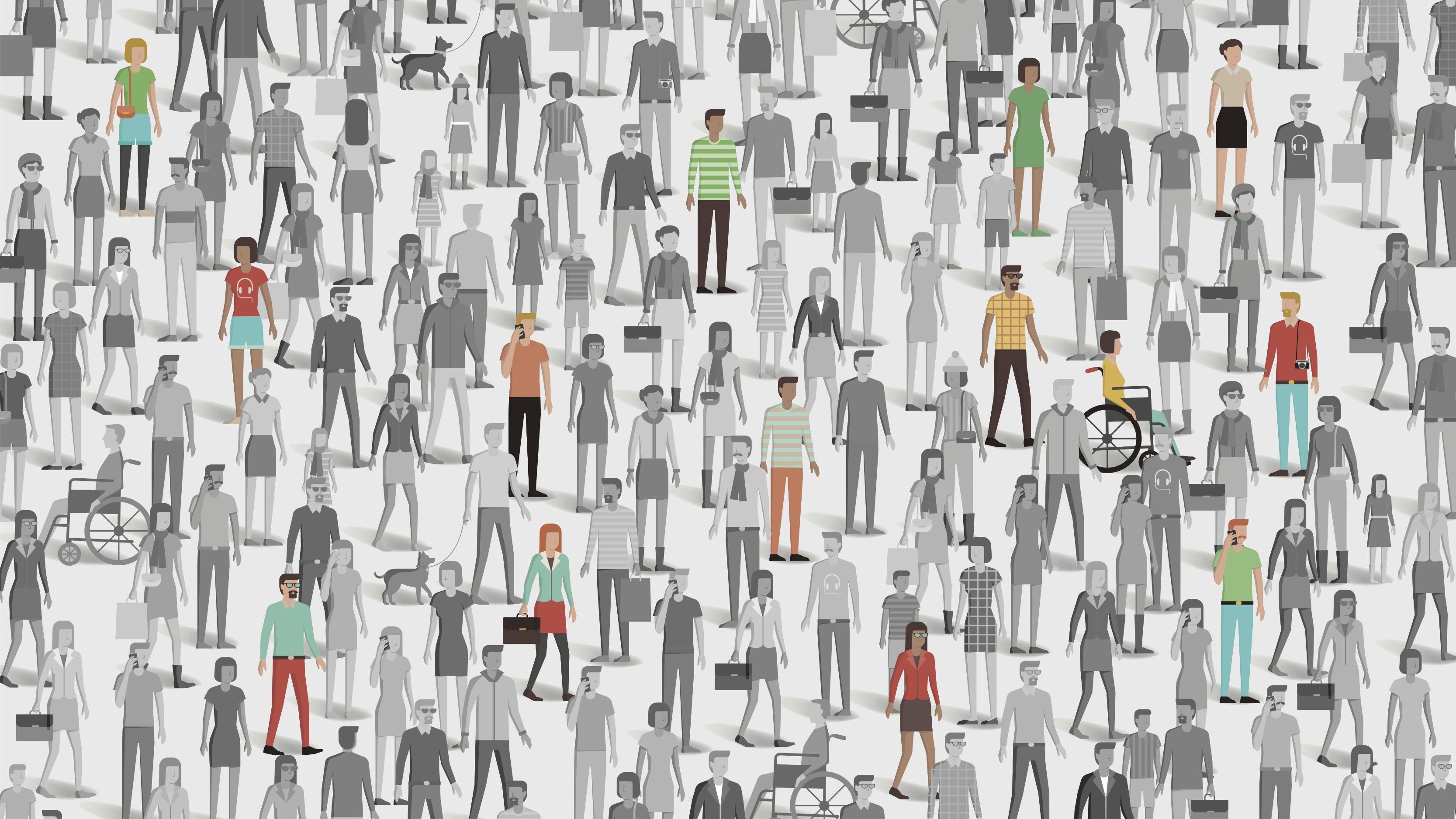 Since the recent reforms of the federal DI laws, the number of pensions has considerably decreased. According to statistics from the Federal Social Insurance Office (FSIO), in 2015, 45,000 fewer DI applications were approved compared to ten years prior. This represents a decrease of more than 20% at a time period of significant population growth (+10%). 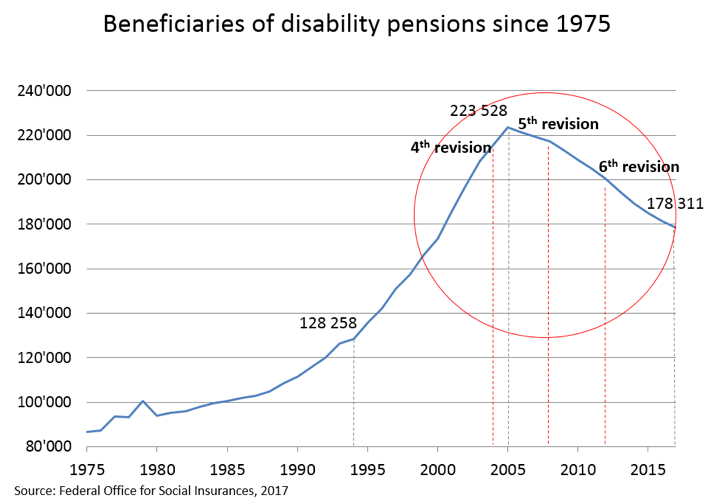 In particular, three reforms have contributed to this decrease:

Overall, the reduction of expenditure pursued by these three revisions has been achieved and has led to the financial consolidation of DI. However, this reduction is mainly due to the tightening of eligibility criteria and the abolition of certain benefits. As for the objectives related to vocational rehabilitation and the early detection and intervention strategy, our study comes to less favourable conclusions.

Study of 1500 trajectories over 48 months

Our study, conducted as part of the LIVES National Centre of Competence in Research at the University of Geneva, in collaboration with the University of Lausanne, reveals several paradoxical developments. In questioning the impact of the DI reforms on insured persons and their access to DI benefits, we analysed the administrative trajectories of a total of 1500 people who applied to the Office of Disability Insurance in the canton of Vaud. From this data, we selected three representative sub-samples of 500 individuals grouped according to the date of the first application for DI (2000, 2004 and 2008). Thereafter, we analysed their trajectories by comparing these three cohorts of insured persons over the 48 months following their recourse to DI.

As our four-year sequential analysis shows, the assessment of disability claims has been accelerated significantly. While for the cohort of 2000 only one-quarter of the applications were processed within a year, for the cohort of 2008, more than two-thirds of the applications were processed during the same time period. A comparison of these two cohorts shows that access to disability pensions reduced over time. Four years after filing an application, almost half (49%) of the 2000 cohort were receiving a pension, compared to 28% among the 2008 cohort. This decrease is largely due to the increase in the number of case rejected by DI (refusals/denials). Four years after their application, 19% of the insured persons in the 2000 cohort had left DI following a refusal, while 28% of the 2008 cohort were in the same situation. Access to vocational rehabilitation measures had increased, albeit only slightly (3% of the insured persons in the 2000 cohort benefited from a rehabilitation measure one year after their application, compared to 8% of the 2008 cohort). 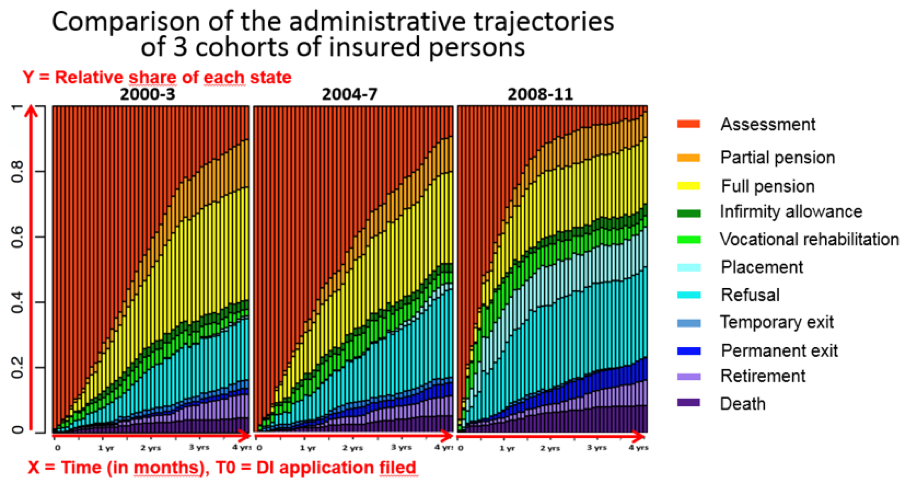 Focussing on the applicant’s age in these two cohorts, our results reveal a paradoxical effect of DI reforms. While these were particularly relevant to the increase in the number of young pensioners, our analyses show that their rate has not decreased (see Figure 2). Indeed, the share of 18-35 year olds receiving pensions (full and partial) remained the same for both cohorts (33%, 4 years after their application). However, for the 35-49 and 50-65 age groups, the impact has been very tangible and is reflected in a marked increase in benefit refusals (+79% among 35-49-year olds, and +54% among 50-65-year olds). Unlike the situation of young people, access to pensions for the older age groups has been significantly reduced, without any significant progress in their access to vocational rehabilitation measures. 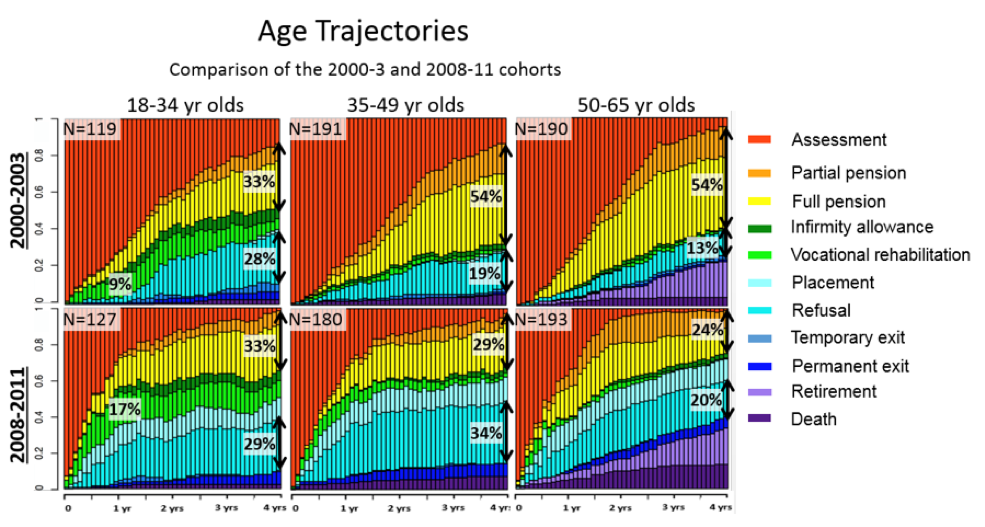 Our analyses point to a reinforcement of certain inequalities. As clearly illustrated in Figure 3, it is the youngest category (18-35 year olds) that benefits the most from vocational rehabilitation measures and this inequality is even greater in the most recent cohort. 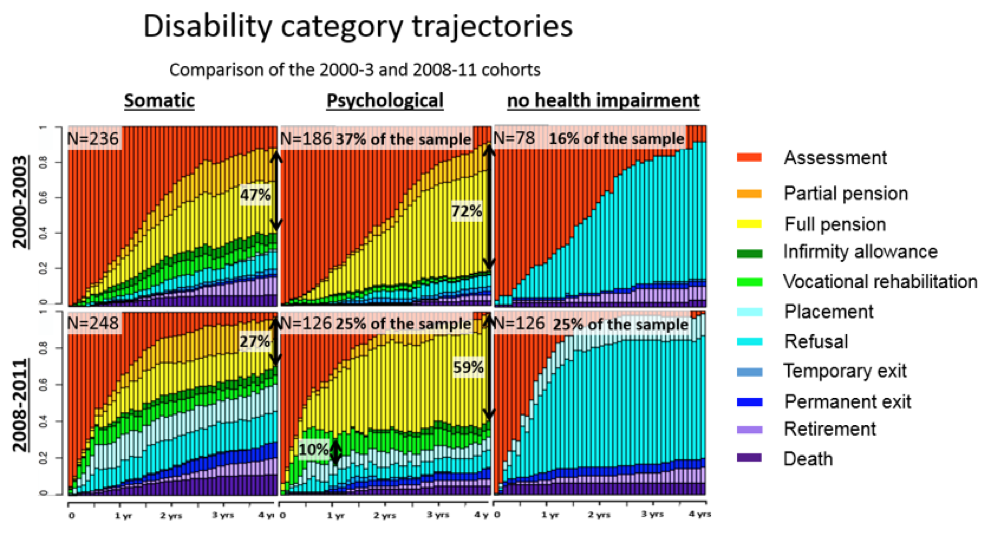 Non take-up: a paradoxical result of the reforms

Our study is also based on the analysis of 23 biographical interviews, conducted mainly with people of the 2008 cohort. This qualitative part of the study helps understand the subjective impact and individual perception of DI reforms. An important conclusion is that despite the early detection and intervention tools, recent reforms reinforced the risk of non-take-up. First, the occurrence of a health impairment is a critical stage in the life course, which is characterised by a high risk of non-use of social benefits. In addition, our study reveals that the objective of reducing expenses, which translates into an increase in the number of refusals, combined with suspicions of abuse that are very present in public debate since DI recent reforms, reinforce the material and symbolic boundaries that mark the take-up of DI benefits. This is illustrated by this testimony of a person who received vocational rehabilitation:

When you enter the disability insurance circle, it is clear that you are immediately catalogued, despite being told that you are not, but I felt like I was. And you are scrutinized, you are scrutinized to see if you tell the truth or whether you lie. That's precisely why you have to go through all these expert assessments and all that kind of stuff. (...) I even had the impression that I was blamed, that I was guilty for asking disability benefits. (Rosenstein 2018)

This leads us to question both the situation of people who do not take-up their rights to DI benefits and the future of people, increasing in numbers, whose application DI denies. Are we witnessing a shift in costs towards social assistance, which is experiencing a significant increase in the number of beneficiaries? Or is the burden being shifted to individuals and households, leaving them responsible for finding solutions to surmount their vulnerability on an individual basis? We can also question the capacity of the labour market to accommodate these people, and the ability of these people to find a job on their own that is adapted to their situation, their health issues and also to their aspirations. As it stands, the available data do not provide the answers to these crucial questions, and therefore, a call is made for new avenues of research.