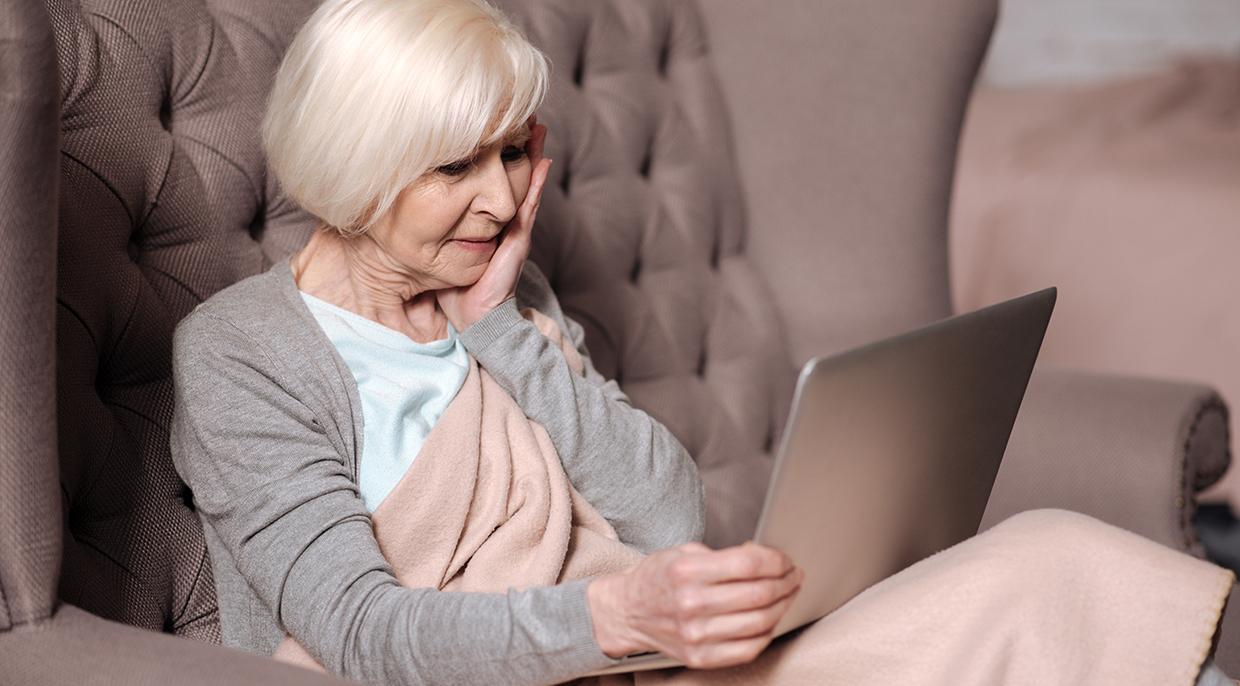 Mental health services are rapidly adapting to the digital age, offering an increasing number of internet-based interventions (IBI) such as LIVIA, developed at the University of Bern with the support of the National Competence Centre LIVES. Aimed at people experiencing prolonged grief symptoms due to the loss of a spouse, LIVIA offers similar advantages to other internet-based interventions: it is easy to access, affordable and can be undertaken at home. Therefore, the timing and pace of the intervention can be determined individually – there is no need to fit into the busy schedule of therapists and travel long distances to a clinic. Moreover, IBIs such as LIVIA also offer a high level of anonymity, removing barriers to counselling or therapy due to stigmatization.

But does it work? And if so, to what degree and satisfaction and under what conditions? In a study, conducted at the University of Bern between June 2016 and July 2017 with 110 participants, we tested the overall effects and their stability over six months. We also examined LIVIAs efficacy on various levels of grief, differentiating between groups with low, medium and high levels of grief at the beginning of the study.

Participants were recruited mostly through the media and internet-self-help forums. All interested individuals registered on the study website, received information on the study and completed a questionnaire followed up with a telephone interview to assess the severity of grief symptoms and eligibility for the study. The latter included (1) the experience of spousal bereavement or a separation/divorce more than six months prior to enrolling in the study, (2) seeking help to cope with prolonged grief symptoms, psychological distress or the psychosocial adaptation to a life without the partner, (3) an internet access, (4) knowledge of German and (5) the informed consent to participate in the intervention and the study. All participants were re-assessed after completion (generally 3 months after the beginning of the intervention) and again 3 and 6 months thereafter. 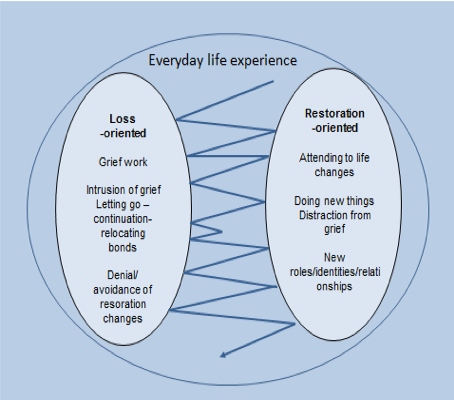 Consisting of ten text-based sessions, LIVIA is based on cognitive behavioural therapy drawing on two models, namely the task model of mourning (Worden, 2009) and the dual-process model of coping with bereavement (Stroebe & Schut, 1999). The fist model focuses exposure and loss-oriented interventions for accepting the reality of the loss, experiencing the pain of grief and adjusting to an environment without the beloved person. The second model underlines the importance of oscillating between loss-oriented tasks such as grief work and expressing emotions towards the deceased and restoration-oriented tasks such as engaging in new activities, distracting from grief, fostering positive emotions, self-care, positive social relationships and creating a new life without the partner (see diagram).

We tested LIVIA’s efficacy on the basis of a randomised controlled trial (RCT). This is a widely used method in science to test the efficacy of medical or mental health interventions. Participants are randomly assigned into two groups – one receiving treatment and the other, the so-called control group, receiving no treatment. In our study, we opted for a “wait list control group” and randomly assigned participants to a waiting list, receiving treatment after a waiting period of 12 weeks. This allows for a comparison between taking part in the intervention and the natural recovery with the passage of time with the added advantage that ultimately no participants is denied treatment. Given their fragile mental health, it would be unethical to offer intervention to one part of the participants, but not the other.

Overall, the RCT included more female than male participants, namely 71 % women and 29 % men with a mean average age of 51. Divorce or separation was the cause of grief for 77 % of the participants, whereas 23 % had lost their spouse through death. On average, participants had lost their partner two years prior to the study after an average relationship of 17 years. According to one of the most widely used psychometric test for measuring the severity of depression (Beck Depression Inventory), 23 % of the participants were showing slight, 32 % moderate and 18 % severe symptoms of depression. Similarly, using one of the most widely used measures for grief (Texas Revised Inventory of Grief), at the time of the initial assessment participants showed considerable signs of grief.

Moreover, compared to the wait list control group, the scores clearly show that the intervention made a difference. As shown in figure 2, for the dimensions grief, depression, psychopathology, embitterment and loneliness improvements were considerably higher with than without intervention. According to the RCT, life satisfaction even dropped without intervention. 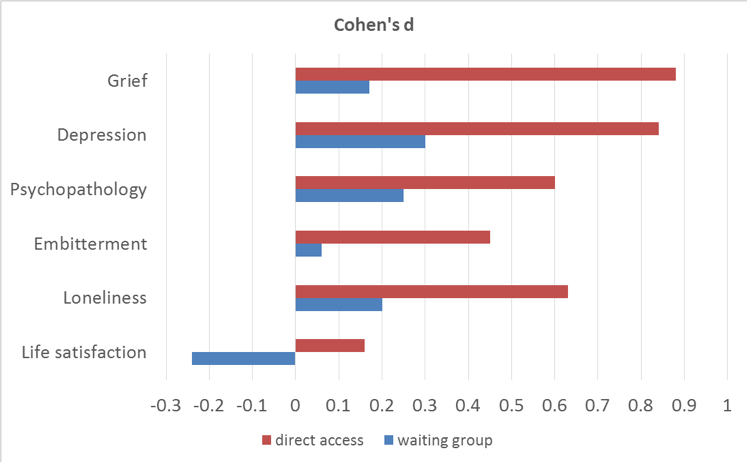 Finally, in terms of efficacy for various levels of grief, differentiating between groups with low, medium and high levels of grief, the RCT suggest similar improvements for all groups (see below figure 3). 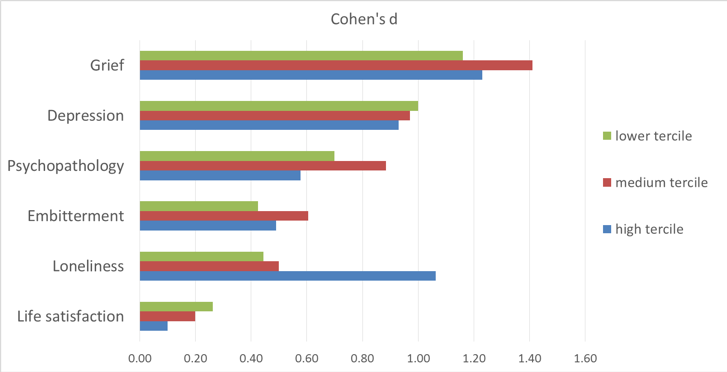 Evidence to date suggests that many people engage in internet interventions, but quickly leave the application. This was clearly not the case for our study. Participants completed on average eight of the ten modules, 57 % completed all modules. Therefore, as a guided internet-based intervention LIVIA is just as effective as a traditional face-to-face intervention. This is in accordance with what we already know from other guided internet-interventions targeting anxiety issues, depression or post-traumatic disorders (Barak et al., 2008; Berger, 2015).

In conclusion, guided internet intervention such as LIVIA are bound to become standard procedures in mental health services, providing effective treatment for psychological disorders and allowing participants greater flexibility in terms of mobility and timing of the sessions as well as greater anonymity. Given that LIVIA also works for lower levels of grief, our findings also suggest that LIVIA may work as indicated prevention for individuals who have difficulty to coping with grief but do not have a clinical diagnosis. This stands in contrast to meta-analyses that concluded that preventive interventions after bereavement are generally not efficacious (Neimeyer, 2000; Wittouck et al, 2011). Importantly, we recruited individuals who sought help for coping with the loss of a partner independent of their level of grief. Help-seeking as criterion may be more relevant for the efficacy of a grief intervention than the severity of symptoms which is normally used to distinguish prevention from treatment.