20.06.2018 > Symposium on the Family supports natural caregivers, the poor relations in social policy 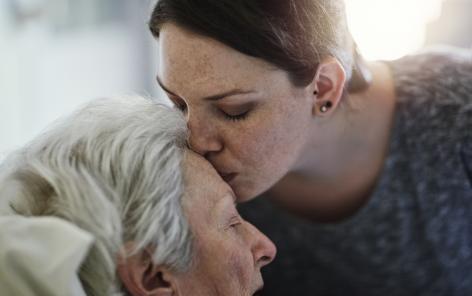 Symposium on the Family supports natural caregivers, the poor relations in social policy

The third Symposium on the Family took place in Geneva on 5 June 2018 at the University of Geneva. Held by the organisation 'Avenir Familles' ('Future for Families') with the support of the Family Observatory and the National Centre of Competence in Research LIVES, the full day of lectures and workshops examined the problems and expectations of family caregivers. Without them the Swiss health service would find it impossible to function. Nevertheless, carers struggle to access institutional support and recognition.

Around one in ten Swiss adults spends time caring for a sick or elderly relative every week. Without this help, the community would be 3.5 billion francs worse off. Furthermore, with an ageing population, the need for carers will only increase. For example, we expect to see cases of Alzheimer's disease double over the next twenty years and health care professionals are already in short supply, meaning that institutions need to recruit abroad.

Faced with this ticking time bomb, the Symposium on the Family brought together some fifty participants on 5 June at Uni Mail, to examine the complex, and sometimes strained, family dynamics surrounding natural caregivers, in addition to considering the need to move their problems up the political agenda.

"Relatives providing care and nursing will be required to occupy an increasingly important role looking after the most vulnerable people. These days they are an essential part of our social cohesion," said State Council member Mauro Poggia in his opening speech. Nevertheless, the magistrate also recognised the difficulties of providing solid institutional support to family caregivers at federal and cantonal level.

For example, “the possibility of introducing paid or unpaid leave for extended absence for care work or other forms of support required in looking after a sick relative” as mentioned in a 2014 Swiss government action plan is still under consideration. In the Canton of Geneva, the 2017-2019 Support Programme for Carers also holds out the hope “of assessing the feasibility of a direct monetary benefit.”

In the meantime, the canton set up a telephone helpline Proch'Info (058 317 7000) and an informative website, and committed to examining how it could “expand the offer of respite services” (www.ge.ch/dossier/ge-suis-proche-aidant, website in French only).

Because it is a reality that natural caregivers bear an extremely significant social and familial burden without even expecting any sort of payment, and need to take a break every now and then. This became obvious from the different presentations and discussions that took place on 5 June.

Séphanie Pin, currently a unit manager at the Institute for Social and Preventative Medicine of the Lausanne University Hospital, presented the results of the AGEneva Care study conducted in 2015 by IMAD (Institution Genevoise de Maintien à Domicile [Geneva Institution for Home Care]) in association with NCCR LIVES. Involving almost 300 natural caregivers, most of whom were caring for elderly people in their family, the research showed that two-thirds of those surveyed suffer from exhaustion and that half of them have nobody else they can rely on.

Representing 37% of the family caregivers in the study, spouses in particular suffer from a sense of confinement. Adult children, who made up over half of the interviewees and were overwhelmingly female, work 25 hours a week on average, providing a wide and sometimes burdensome range of services. Furthermore, 59% of them also hold down a job.

While all the family caregivers in the Geneva study said they had a good relationship with the person they care for, we can, however, observe a significant drop in life satisfaction as the number of hours spent caring for their relative increases. The problems most often mentioned by the great majority of caregivers were not having anyone to relieve them and not being able to take a break. In contrast, fewer than 15% of the carers interviewed said they experienced financial difficulties.

A complementary three-part investigation by the University of Geneva's Family Observatory also presented at the Symposium gave a more detailed picture.

On the quantitative side, Olga Ganjour and Eric Widmer analysed the VLV survey database, focussing in particular on 700 pensioners in Geneva. They compared family help provided by family caregivers to official assistance provided by institutional or private organisations.

They note that families are especially involved in interpersonal help, such as providing a presence or taking the elderly person out for a walk. But quite a large minority of natural caregivers also carry out other tasks, such as doing shopping, maintaining the house and garden, cooking or managing administrative tasks.

This practical help creates far more tension in the family than purely interpersonal help. Myriam Girardin confirmed this observation in the qualitative part of the investigation. According to the researcher, "spousal care is relatively straightforward, but when children are involved, it becomes more complicated, because they have other work, family and social commitments."

Tension within the family

Her interviews with caregivers from the next generation down from the person being cared for show that tension is often present between the relative providing nursing and other members of their family, such as their spouse, siblings, or even their own children, because of conflicting priorities.

"We don't do much together any more," said one carer talking about her 12-year old daughter. "By the evening I'm so exhausted (...) she feels I don't love her or listen to her enough and I don't have the patience to be with her as a mother should."

This exhaustion leads to a number of family caregivers isolating themselves socially or putting their own health at risk. Eventually, some carers break down and need emergency paid help from official services. This was the view of professional care workers interviewed prior to the Symposium by Marie-Eve Zufferey-Bersier, a scientific collaborator at the Observatory and mainstay of the Avenir Familles association, who presented their perspective.

A status for family caregivers

In the afternoon workshops it was possible to analyse in greater detail the distribution of roles between families and institutions, carers' need for support, their awareness of the existing network and their access to these services, and finally the issue of status for family caregivers, which many of them demand.

According to participants at the Symposium of the Family, this status would give them better access to rights such as training and information, as well as material and human resources for respite time.

In summarising the discussions in her workshop, Claudine Burton-Jeangros, professor in health sociology at the University of Geneva, emphasised that "Autonomy is such a strong societal norm that it often stops family caregivers, and those they care for, recognising their own needs. We are yet to have a public debate on what we can legitimately expect from each person," she added.

The Family Observatory's research shows that Swiss society cannot expect natural caregivers to do everything. As Professor Eric Widmer observed, "The family is not a given or automatically present and doubtless will be less so in the future. It is a personal construct that develops throughout the life course. If family caregivers are the solution for the future, we need to get a move on and think properly about how to support families going through this process. It's an enormous challenge from the point of view of inter-generational relationships."