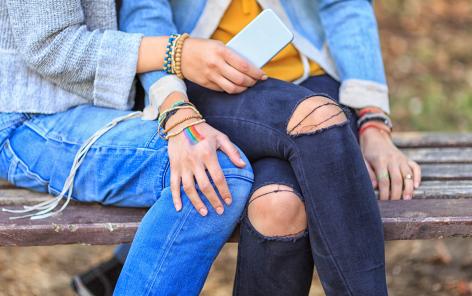 Sex in all its forms... An unprecedented scientific survey of 40,000 young people

In the coming days, one sixth of people aged between 24 and 27 residing in Switzerland will be contacted and asked to respond to a questionnaire which will include an electronic 'life calendar'. The aim is to establish a link between life courses and sexual experiences in order to gain a better understanding of the contexts that may lead to persons taking risks, suffering abuse, experiencing sexual dysfunction or simply living out their sexuality in a fulfilling way.

Sexting, Viagra, the morning-after pill, the end of taboos about homosexuality and greater awareness of the trans-gender phenomenon: many things have changed in relation to sexuality over the last twenty years, marked, among other things, by the emergence of the Internet and the widespread normalization of AIDS. A group of researchers from the CHUV, the National Centre of Competence in Research LIVES at the University of Lausanne and the University Hospital of Zürich will attempt to produce an analysis of the sexual practices of young people today on the basis of a large survey which will start in June and which will focus on several tens of thousands of people born between 1989 and 1993.

Twenty five is the age at which a person may already have a certain perspective on his or her first intimate relationships. This in-depth survey aims to collect a wealth of information on the chronology of the sexual experiences of young people and their links to other events relating to physical and psychological health, emotional relationships, education, professional integration, etc.

"Sexuality cannot be isolated from other areas of life," explains Prof. Joan-Carles Suris, the principal applicant for this project, which is being financed by the Swiss National Science Foundation. "For example, if your sexuality does not meet your expectations, either in terms of quantity or quality, or if it is problematic due to various factors, which may be related to abuse or dysfunction, your general well-being will be affected, which in turn can have an impact on your social relationships and your productivity at work or in your studies."

Among the cases of problematic sexuality, the researcher also refers to the taking of risks in the context of unprotected relationships with occasional partners, a phenomenon that is often associated with substance use. There is also the whole question of unwanted relationships, which do not necessarily occur in the context of violent coercion, but which can nevertheless result in suffering.

In relation to sexual dysfunctions, these can affect both women and men: vaginal dryness for women, which can cause painful sexual intercourse; erectile or premature ejaculation problems for men, which causes great stress for those involved.

All these issues, and many others besides, must be better understood in a longitudinal way, that is to say, by following the order of the events that have marked out the life course of each person, while taking care to understand the individual as a whole.

The last survey on the sexuality of young people dates back to 1995, a time when society had not yet experienced the rapid changes of recent years. Today’s challenges are no longer quite the same and this new study is a lot more ambitious, both in terms of the issues being addressed and the methods of collating them.

The young people will be contacted by mail using a sample provided by the Federal Office of Statistics. They will then have the opportunity to log on to the internet and to use - in complete anonymity - an extremely innovative tool in the second part of the survey. This is an electronic 'life calendar', a visual and interactive way of noting the various events that have occurred throughout one's life. A trial phase was carried out on students from the University of Lausanne in order to render the software more intuitive and flexible. This pilot demonstrated that, in comparison to traditional questionnaires, the life calendar is an effective way of stimulating autobiographical memory and thus remembering more events.

The forthcoming survey could therefore be of significant interest: for its subject matter, because there is a lack of data about the sexuality of young people, both in Switzerland and internationally; and for its method, which goes beyond the traditional use of paper versions of life calendars, which can take a long time to decipher and code before analyses can be performed.

For this new research project, Prof. Suris, a member of the Institute of Social and Preventive Medicine (IUMSP) and head of the Research Group on Adolescent Health (GRSA), gathered together specialists in the methodology of the study of life courses. He is being supported in this project by Prof. André Berchtold, statistician, and by Davide Morselli, social psychologist, who are both members of the National Centre of Competence in Research LIVES. Prof. Brigitte Leeners, a specialist in sexual dysfunction at the University Hospital of Zürich, and PhD student Yara Barrense-Dias, who is attached to the IUMSP, complete the core team, which will work with other partners such as Christina Akre and Raphaël Bize (IUMSP), Sylvie Berrut (Santé PluriELLE / LOS), Annick Berchtold (Abiris) and Caroline Jacot-Descombes (Sexual Health Switzerland).

The first report, due in early 2018, will be followed by several scientific publications on various aspects of the project, in which the team may well address a number of taboo subjects.

With Prof. Suris and Christina Akre, Yara Barrense-Dias has already published (last February) a surprising, accessible and yet little-noticed report on the phenomenon of 'sexting', which refers to the electronic transmission of material of a sexual nature. Noting that this practice is 'defined in positive terms by the majority of young people as merely an exchange between two consenting persons', the researchers call for the practice not to be demonised but rather for those guilty of sending unwanted materials and of harassment to be identified, and for the victims to be exonerated and supported.

It is this same desire to understand the evolution of the practices and issues without taking a moralistic posture, but rather with the aim of prevention and screening, that motivates the entire team involved in the study on the health and sexual behaviour of young people in Switzerland. "We do not have any preconceivedattitudes, that's what makes the research interesting," says Prof. Suris. Hence his exhortation to the recipients of the mail soon to be received by 40,000 young people: "Please, please, please take part!"

This workshop will take place on November 2-3, 2017 at the University of Geneva. Its aim is to discuss the heuristic potential of the concept of ambivalence to study the accumulation of vulnerability over the life course. Deadline for abstract submissions is July 3, 2017.

As individuals move over the life course they experience multiple roles, they move over different contexts of socialization, and they accumulate resources and stresses across several life domains (family, intimacy, work, leisure, health, citizenship, migration, etc.).Individuals are thus likely to experience contradictory demands between these several spheres, which can generate the experience of ambivalences. Thus, if on the one hand, ambivalence can produce vulnerability; on the other hand, it can also represent a coping strategy to deal with vulnerability over the life course. For instance, individuals may experience psychological distress by trying to conciliate work and private life, but the experience of ambivalence may also incentivize individuals to find more suitable and innovative strategies of family-work balance, and to become socially creative.

The experience of certain critical events and normative and non-normative life transitions can potentiate ambivalence in relationships, feelings, cognitions, attitudes, practices, and rituals which can reconfigure spaces of vulnerability. Actually, the life course has an inherently multilevel nature since human lives are built in the interplay between historical, normative, political, structural and subjective levels. However, these levels can often be in conflict with each other, triggering ambivalences in individuals, families and groups. For instance, how do couples cope with inconsistency between their perception of prevailing gender norms and their own strategies of family-work conciliation?

The current debates on life course studies often describe human lives in contemporary societies as characterized by uncertainty, complexity and contradiction, thus forced to deal with contingencies. Individuals oscillate and vacillate between agency and structure, resources and constraints, stability and instability, individualization and pluralization, reproduction and innovation, tradition and modernization, standardization and de-standardization, linearity and turbulence and claims of authority and influence. These dynamics are embedded in vulnerability structures, but it can also generate vulnerabilities in short or long-term. Therefore, we believe that ambivalence can be used as a framework to give sense to these complex dynamics. This requires theoretical and methodological elaborations of the concept.

The workshop will be divided in two parts. First, we will have a round table with key-note speakers who will address the topics of ambivalence, vulnerability and life course both theoretically and empirically, followed by a joint discussion on the potentials, gaps and challenges for future research on the articulation of these three research topics. The second part consists of a discussion of the submitted manuscripts, previously distributed among the participants.

We welcome both empirical and theoretical papers discussing themes on the intersection of ambivalence, vulnerability and life course, to be distributed in advance among the participants. In the workshop we intend to stimulate interdisciplinary discussions on these topics and to potentiate research networks.

The registration is free and includes the social dinner on Thursday and the lunch on Friday. The participants are responsible for all other expenses.

Abstracts of the manuscripts should be submitted in English via email to rita.gouveia@unige.ch. Abstracts should have at least 800 words and a maximum of 1000 words (excluding the title, the authors’ name, e-mail, and institutional affiliation).