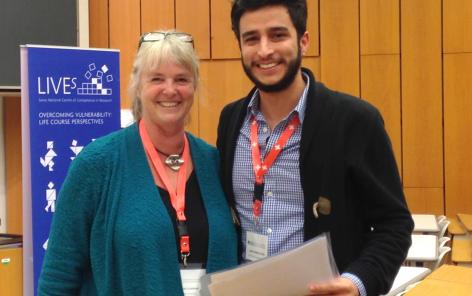 Ignacio Madero-Cabib won a prize for one of the three best posters during the annual conference of the Society for Longitudinal and Life Course Studies (SLLS), which happened at the University of Lausanne from October 9 to 11, 2014. The Swiss National Centre for Competence in Research LIVES was the local organiser of this congress, which included about 200 presentations, over 40 posters and two keynote lectures, notably by Prof. Giuliano Bonoli's from the University of Lausanne.

The President of the Society for Longitudinal and Life Course Studies (SLLS), Elizabeh Cooksey, professor of social demography at the Ohio State University, and other members of the SLLS executive committee remitted three certificates for the best posters among the fourty or so presented during the 5th annual SLLS conference, which the NCCR LIVES hosted this year at the University of Lausanne.

There were two keynote lectures. Giuliano Bonoli, professor of social policy at the Swiss Graduate School of Public Administration (IDHEAP) and member of LIVES IP4 at the University of Lausanne, gave the opening lecture on The Social Investment Strategy: Social Policies in a Life Course Perspective. Using data from different studies, including some led by his team, he showed the limits but also the promises of social investment. Preschool programmes, for instance, which we know positively impact further school performance, mainly benefit to the middle class: that is the famous "Matthew effect". Nevertheless social policies provide access to childcare support to deprived people, for instance, through reduced fees. Prof. Bonoli called for further research on this question.

The other keynote speaker was Kathleen Kiernan, professor of social policy and demography at the University of York (UK). Drawing from the UK Millenium Cohort Study data, she talked about the impact of family environment on young children and showed that poverty negatively impacts cognitive and behaviour skills below age 5. But, she said, to improve both dimensions "parental warmth is more important than wealth".

Throughout the 3-day conference participants issued many tweets using the hashtag #slls2014 to hightlight both the conference’s scientific content and the social events, some of which ended late at night...

07.10.2014 > Social policies at the centre of debates during the third Conference on Poverty 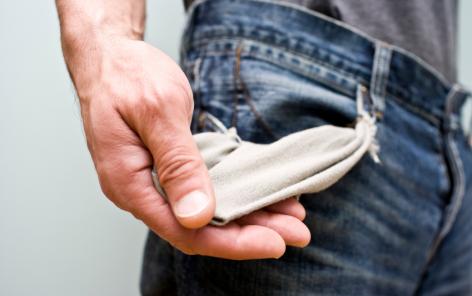 Walter Schmid set the stage for the conference, which was structured in 8 lectures and 13 workshops. The former president of the Swiss Conference of Social Services’ Institutions (SKOS/CSIAS) held a passionate opening speech on Switzerland’s minimum welfare benefits. According to him, these are currently at risk of being undermined. In recent years, asylum seekers have seen assistance cut to the bare minimum and in cantons such as Berne the minimum welfare benefit has been cut by ten per cent. Should this trend continue, Walter Schmid warned that Switzerland’s complex and fragmented welfare system is bound to turn into a two-tiered system whereby an ever more rising number of people would receive considerably less than the existing minimum welfare benefit, currently set at 60 per cent of the Swiss median income.

A QUESTION OF JUSTICE?

But what justifies the maintenance of such welfare expenses? In one way or another, most conference lectures offered answers to this question. For Walter Schmid the response was clear: basic human rights as set forth in Article 12 of the Federal Constitution guarantee the “right to assistance and care, and to the financial means required for a decent standard of living” for people in need.

Peter Sommerfeld from the University of Applied Sciences and Arts Northwestern Switzerland also referred to the Federal Constitution, but offered a somewhat different view. Discussing the role of social work in combatting poverty, he justifies anti-poverty policies as a form of social justice derived from the constitutionally enshrined claim to individual wellbeing. Thus, following Peter Sommerfeld, who draws on the capability approach, poverty must be understood as a deficiency in wellbeing, which might best be remedied by focusing on the capabilities of the individual rather than using numerical values such as the median income as the basis for work to alleviate poverty.

Away from ethical considerations, Jacques Donzelot from the University of Paris X Nanterre turned the audience’s attention to the history of anti-poverty policies, pointing out that two intrinsically intertwined motives have always been shaping social policies and specifically anti-poverty policies: charity and social control. This holds true for the pre-modern system of philanthropy and patronage, the insurance-based social security system in industrial societies or the current policies against social exclusion and disintegration which, Jacques Donzelot claimed, nowadays sustain social cohesion with a view to mobilise society against the outside world.

A DIVERSITY OF PEOPLE

It remains an open question whether Jacques Donzelot had French society in mind when referring to the defensive character of social-cohesion policies. That said, the conference clearly showed the diversity of people affected by poverty and policies involved in combating poverty. Professor at the Haute école de travail social et de la santé - EESP Lausanne (HES·SO) Morgane Kuehni’s lecture unveiled the diversity of people lumped together in the category of the working poor with some feeling outraged and ashamed about their living conditions, other resigned and yet others feeling no remorse.

Professor at the University of Fribourg Monica Budowksi and Director of the Swiss Household Panel at FORS Robin Tillmann showed this diversity in quite different ways by demonstrating the difficulties social scientists encounter when they seek to analyse and quantify poverty. The latter varies in scope depending on the methods and indicators that researchers use to conduct their studies.

The string of 13 workshops most obviously showed the diversity of people and policies related to poverty. Included were such broad topics as indebtedness, aid in kind, poverty in young and old age, housing, health and employment. Other topics were more specific such as case management or cooperation between Switzerland’s many public welfare agencies. All of these workshops started with presentations held by a researcher and a practitioner, followed by an open discussion allowing for an exchange of ideas, experience and knowledge and thereby fostering contacts across professional fields and academic disciplines.

Not surprisingly, translated into actual policies, this diversity requires action on a broad front. Bea Cantillon from the University of Antwerp provided a rationale for such a broad policy programme by presenting the social investment perspective to the conference.

Pointing out the loss of power of purchase among increasing segments of Swiss society, Pierre-Yves Maillard, State Councillor of the Canton de Vaud, went into the nuts and bolts of anti-poverty policies and advocated in his presentation of the canton’s anti-poverty strategy a range of specific policies along with the known and institutionalised insurance schemes covering health, disability or old age. As he explained, the Canton of Vaud has put into place subsidies for families, students, affordable housing and health care as well as schemes for unemployed young adults and women. Moreover, according to Maillard, the canton also embarked on a programme aimed at the prevention of poverty, sponsoring projects in schools and early-childhood education.

Director of the Swiss Programme for preventing and combating poverty at the Federal Office of Social Insurances Gabriela Felder presented the programme, which was launched in 2014, and yet again demonstrated the great diversity in scope, approach and implementation when dealing with issues of poverty. As she explained, the programme will develop multiple projects along four axes, namely: access for children and young adults to education; social and professional integration; general living conditions; and the monitoring of the measures taken. Planned until 2018, the programme will be allocated a budget of 9 million francs – some of which will hopefully alleviate poverty.