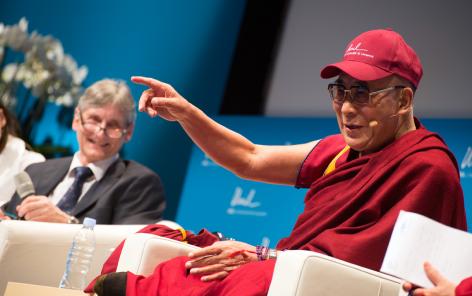 During a visit to the University of Lausanne on April 15, 2013, the spiritual leader answered questions from several scientists, including Prof. Dario Spini, director of the NCCR LIVES. Throughout the day, Tenzin Gyatso displayed a sincere interest in research, and he is proof that at nearly 78, your mind can remain effervescent.

Ten views on aging — from the humanities, social science and medicine — were discussed on Monday, April 15 at the University of Lausanne to honor the Dalai Lama's call for a dialogue with scientists. Ten points of view plus one : that of Tenzin Gyatso, always wise, often facetious and at times modest; not forgetting the excellent moderation of the debate by vice-chancellor Philippe Moreillon.

The university organized a large-scale event, with nearly 1,300 handpicked guests in the hall and a broadcast for those not fortunate enough to have a seat. The large crowd was mainly interested in hearing this exiled Tibetan leader, whose relaxed manner contrasted with the formality of the occasion.

During the morning session, Dario Spini, director of the Swiss National Centre of Competence in Research LIVES, was the first of the round table participants to outline current knowledge of the aging process as seen from a "life course" perspective, the NCCR LIVES specialty.

Prof. Spini mentioned the increase in life expectancy and the fact that, in the West today, old age consists of two stages: a first one, where seniors are still active and in good shape, followed by a later end of life, in which increased physical and mental fragility become a challenge for families and society. Finally, he stressed that responses to old age take various forms: while old age still evokes negative attitudes, studies show that seniors' well-being is often better than that of adolescents and young adults. Dario Spini says it would be useful to develop a better interdisciplinary understanding of ways to be more “authentic and generative” during the last stage of life.

How does one age well?

Like all the other roundtable participants, Prof. Spini had prepared a question for the Dalai Lama, presented as one for which science has still not found an answer: "How can we age well when our physical forces are declining?" the LIVES director asked. "Through a genuine concern for others," his Holiness replied. "A healthy mind means not only knowledge or education, but mainly is a warm heartedness."

Throughout the day, the spiritual guide returned several times to the question of education. He spoke of the training necessary — from the earliest age — to be aware of emotions, for sensory experimentation and reflection. "Don't just copy, but analyze by yourself, debate and create an alert mind!" he urged the audience, particularly the students.

Because, according to the Dalai Lama, "There is no effective method" for changing after a certain age: "That must be cultivated from childhood, ... unless you can operate on the brain to take out anxiety and replace it with enthusiasm," he said with a loud laugh.

Several times he underlined the need for research on certain topics: for example, on the impact of friendly surroundings on the elderly, or on phenomena associated with retaining memory. He took the opportunity to mention the creation in Zurich of a Swiss branch of a US-Indian institution that he helped develop: The Mind & Life Institute. He called on the Swiss and their researchers to get involved. "Education may change the whole humanity, not the Buddha or Jesus Christ," the Dalai Lama said. He eventually promised he would make himself available to return another time for dialog with scientists.

"I came out of the meeting energized and happy," said Dario Spini at the end of the event.

19.04.2013 > Amartya Sen receives a doctorate honoris causa in the presence of a LIVES project leader 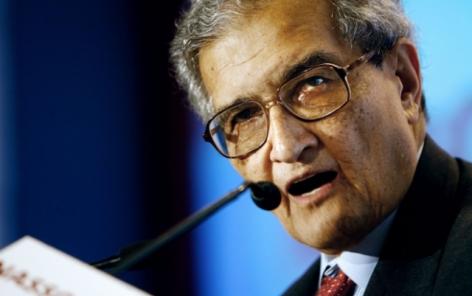 Prof. Jean-Michel Bonvin, head of the NCCR LIVES' IP5, participates on April 22-23, 2013, in an international symposium at the Paris Catholic Institute. This will be the occasion to give a Doctorate Honoris Causa to Amartya Sen. The Nobel economics prize-winner will give an inaugural lecture, which will be followed by a series of round tables on capabilities.

On Wednesday, April 10, 2013, Aline Duvoisin received the 3rd prize ex-aequo at the biennial event organised by Pro Senectute Switzerland and the Institute of agsing of the Bern University of Applied Sciences. This honour rewards research work on survey data Living / Leben / Vivere (VLV) conducted by the Interfaculty Centre of Gerontology and Vulnerabilities Studies (CIGEV) within the NCCR LIVES.

Do seniors know the Pro Senectute Foundation? To what extent do they use its services and what prevents non-users? To find out, the foundation commissioned the CIGEV in Geneva so that that the questionnaire VLV - large survey of 3,000 elderly residing in five Swiss cantons, co-funded by the NCCR LIVES within IP13 - be accompanied by a serie of questions relating to the notoriety and usefulness of Pro Senectute. A student focused her Masters thesis on this part of the investigation and submitted a report to the foundation in November 2012. Aline Duvoisin, now engaged as a PhD student at the NCCR LIVES, thus won a prize of 2000 francs at the Swiss Symposium on Gerontology, which runs from April 10 to 12, 2013 in Bern.

Notoriety and usefulness of Pro Senectute

Aline Duvoisin’s research shows that seniors know well Pro Senectute Foundation, especially in Basel and Berne (96% and 95% of respondents), as well as in Ticino and Valais (81% and 78%), and to a lesser extent in Geneva (65%). Women are more aware of this organisation and use it to a greater extent than men, especially for gym classes, social consultations and moments of conviviality such as meals. Persons of foreign origin, those whose social and civic participation is low and people living with a partner are less likely to use the services offered. Pro Senectute users represent 16% of survey respondents aware of the existence of the Foundation in Basel, 15% in Berne, 11.5% in Valais and Ticino, and only 3.7% in Geneva. In this canton, characterised by a greater diversity of associations devoted to the third age, AVIVO is better known than Pro Senectute.

In her conclusions, Aline Duvoisin notes that Pro Senectute reaches indeed, to a certain extent, the potentially vulnerable elderly. She recommends, however,  to increase the visibility of the foundation, and avoid giving the impression of an institution reserved for those in need. Finally, she emphasises the challenge of responding to the denial of ageing. "For many seniors, using the services of Pro Senectute would be an admission of weakness. But when the vulnerability eventually occurs, it is sometimes too late. Perhaps by organising more intergenerational activities and without connotation of helping the needy, the demand will be stronger," suggests the young researcher.

09.04.2013 > Research on transmission of fertility norms from mothers to daughters presented in the USA 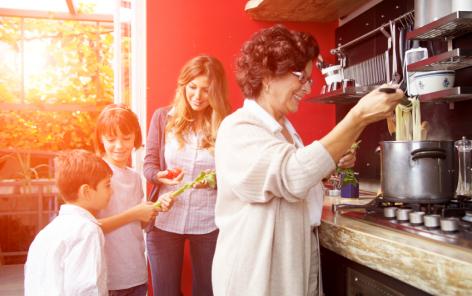 The annual meeting of the Population Association of America (PAA) will take place from 11 to 13 April 2013 in New Orleans Louisiana. An article of Prof. Laura Bernardi, Deputy Director of the NCCR LIVES, will be presented.

"From Mothers to daughters: intergenerational transmission of fertility norms" is the title of an article of Prof. Laura Bernardi published this year in a book edited by Anne Lise Elligsaeter, An-Jensen and Merete Lie Magritt. The three Norwegian researchers led the 17th issue in the series Routledge / European Sociological Association studies in European Societies.

The paper of the Swiss National Centre of Competence in Research LIVES' deputy director, which will be presented during the session 171 of the PAA Annual Meeting,  is based on a qualitative research work that she led in Italy between 2004 and 2006.