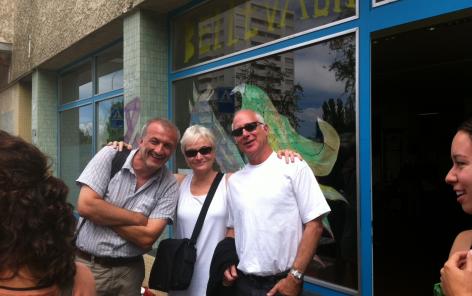 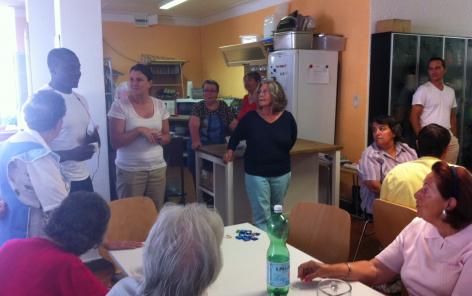 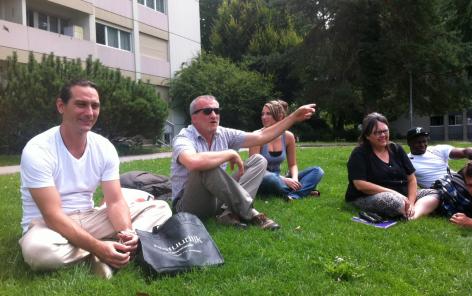 From Lives to LIVES : US students visiting the elderly in Lausanne

In summer school at the University of Lausanne, 25 young people from the Arizona State University spent the 30th day of July, 2012 along with prof. Dario Spini, director of the National Center of Competence in Research LIVES, who introduced them to the theory of life course and showed them the life of seniors in the Bellevaux District in the context of the "Districts Solidarity" project of Pro-Senectute.

Professors Carol Martin and Richard Fabes are psychologists and work for Lives. LIVES? Not the National Center of Competence in Research (NCCR) "Overcoming Vulnerability: Life Course Perspectives", but "The Lives of Girls and Boys", which is a series of initiatives by the School of Social and Family Dynamics based at the Arizona State University (ASU). While the Swiss LIVES examines the life course of young adults up to the fourth age, the American Lives focuses on the cognitive development of children and adolescents, and seeks to fight against gender stereotypes in order to improve relationships between youngsters of both sexes.

Accompanying 25 students from their university during summer school in Lausanne, Professors Carol Martin and Richard Fabes were immersed with these young people into another reality this July 30th, 2012: the elders of the Swiss State of Vaud, thanks to Prof. Dario Spini. Charged by the International Relations Department of the University of Lausanne to organize a day on a topic close to his research for this visiting group, the NCCR LIVES director took the young Americans around the Bellevaux working-class district in Lausanne to show them how seniors have organized themselves into an active community, through an initiative of the Pro-Senectute Association.

After morning class on the theory of life course where students became familiar with the longitudinal and interdisciplinary perspectives of NCCR LIVES, the group reached the senior community center of the Bellevaux neighborhood and got a meal served by lively retirees. Then Alain Plattet, Head of the Social and Community Work Unit of Pro-Senectute, led the folks to a nearby park and told the story of the "Districts Solidarity" approach, which was born in the Bellevaux neighborhood and has since inspired a fifteen other similar experiences in the State of Vaud.

"What you saw during this lunch may seem natural, but none of this was easy at first," remembered Alain Plattet going back to 2003. When this young social worker arrived in the district, appointed by Pro-Senectute to understand the needs of the elders, there were 10 professionals for 3 seniors at the first meetings. Less than ten years later, between 300 and 400 people participate in various activities, representing half of the area’s retirees.

This success is due to the fact that projects are defined and implemented by the participants themselves: lunch on Monday, Wednesday coffee, yoga classes, medical lectures, creative workshops, etc., not to mention the newspaper announcing the program: everything is done by the members of the "Bellevaux Connection" Association, which became completely independent from Pro-Senectute with time. The concept is now solid: after five years, the parent-association generally withdraws and leaves the conduct of the approach to local forces. "What people need are contacts and feeling author and actor of their own projects," says Alain Plattet.

In this green park surrounded by 15-storey buildings, hard to believe for young Americans that they were sitting in an area known for insecurity, where older people hardly dared to leave their homes a few years ago. The fact is that the “Bellevaux Connection” seniors were certainly not afraid of the foreign students’ tattoos. 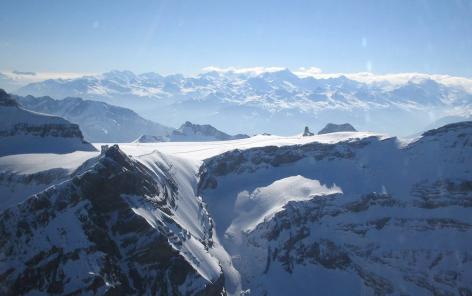 Thanks to the collaboration between four international research centers, the "LIVES Winter School on Life Course 2013" will be held in Les Diablerets (Swiss Alps) from 23 to 30 March and will offer three workshops.

The Steering Board of the Winter School on Life Course is composed of representatives of:

Workshop topics will be: 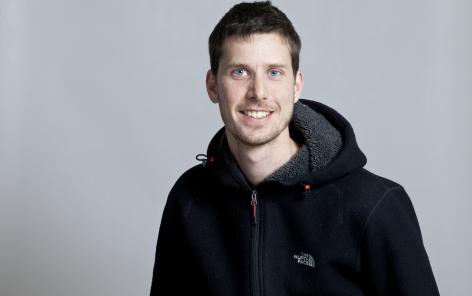 A LIVES PhD student won an award at a European conference

Jonathan Zufferey, whose thesis project focuses on the evolution of the mortality of migrants in Switzerland over the last 20 years, won a prize for a poster presented in Sweden at the 2012 Conference of the European Association for Population Studies.

Jonathan Zufferey, LIVES PhD student based at the University of Geneva and member of IP14, won an award for his poster entitled:  “Differences in migrants mortality: for a multilevel approach of spatial inequalities using a fine granularity. An application to Switzerland, 1990-2008".

His thesis project starts from the "Migrant paradox" developed especially by Ana Abraido-Lanza, stating that migrants have a higher life expectancy compared to the indigenous population despite an often lower socioeconomic status.

Comparing this theory with data from the Swiss National Cohort, Jonathan Zufferey noted that in Switzerland “the natives have homogeneous spatial regimes of mortality”, whereas “an important differential appears for migrants”, with a high heterogeneity intra-regions. The PhD student thus proposes to use “a multilevel approach on migrant mortality using a fine granularity with environmental and sociocultural factors at a local scale”. This should allow a better understanding of the migrant mortality.

See the poster of Jonathan Zufferey

Several members of the Swiss National Center of Competence in Research LIVES participate from July 2 to 6, 2012 in Rabat in the 19th Congress of the International Association of French Speaking Sociologists.

Prof. Nicky Le Feuvre, Head of IP6, speaks on July 5 in a plenary session entitled "The challenges of uncertainty."

Prof. Michel Oris, head of the IP13 and co-director of LIVES, will chair a session entitled "Vulnerability and the Life Course of the elderly."

Cornelia Hummel and Stefano Cavalli, advanced researchers, organize the sessions of the Research Committee "Life Course and Aging" on the theme of uncertain life courses and the plurality of aging.

Other members of LIVES are attending the congress and presenting research results.