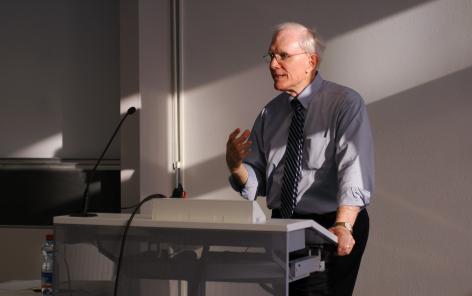 Distinguished by a doctorate Honoris Causa from the University of Geneva, the famous life course specialist shared on April 18, 2013 with NCCR LIVES members and a broader public some key facts of his biography tinged with elements of the paradigm that he played a role in developing.

For those who were on another planet than the social sciences for the last 50 years, let us start by noting who Glen Elder is. Howard W. Odum Distinguished Professor of sociology and psychology at the University of North Carolina at Chapel Hill (USA), he is the author of Children of the Great Depression.

First published in 1974 and many times reprinted in enlarged editions, this book is a major reference for the life course paradigm. It shows how the economic and social crisis of 1929 in the United States differently affected children born in 1920-1921 and those of 1928-1929. Whereas the youngest cohort had a very tough start in life because of family responses to hardship including coping with scarcity and emotional strain, the oldest cohort was indeed too old to be as vulnerable to family strain and too young to encounter the problems that their parents experienced in the labor market.

Prof. Elder was invited on April 18, 2013 at the University of Geneva for a lecture in the series of public conferences on Vulnerability in the Life Course organized by the Institute for Population and Life Course Studies (IDEMO) and the National Center of Competence in Reseach LIVES. On this occasion, he received in person the doctorate Honoris Causa that the University of Geneva had awarded him last fall during the Dies Academicus. He then gave a talk about his career in relation to the evolving field of life course studies, as viewed in terms of the following paradigmatic principles:

Glen Elder’s mother was an English teacher, who gave him for a lifelong interest in biographies. His father moved from a medical profession to farming: Prof. Elder feels he owes him his sense of innovation.

"Timing of lives"
The impact of life transitions depends on when they occur.

The Elder family moved to the countryside when Glen was 14 years old. “Before that I was a city-kid.” He thus went the opposite way compared to the majority. Once a student in social psychology, he also worked as an orientation counselor for the university, which gave him the idea for his master thesis on “Transition to College”.

"Lives in time and place"
We are the product of a context.

Longitudinal studies started in the 30’s in the United States. When Glen Elder became a post-doctoral researcher in the 60’s, he joined a University of California team that was working on the data that made him famous. Much has happened since then. “Life course publications were less than 50 per year in 1992. They are now above 600 per year. (…) Some of the students we trained are now sitting on the review committees,” rejoices Prof. Elder. “You are in the golden days now. Data are available!”

“It took me a life to develop a full understanding of the life course.” “Study after study, I saw repetitions, recurrent things,“ which became the material for his theories.

"Human agency"
Humans are not passive but are able to make decisions that shape their lives.

“My boss in Berkeley was continuously fighting for funds to support longitudinal studies in Washington. As a result, I had room to be creative.” “I had to innovate to minimize cost of data collection.” Mixed method was the way: “Qualitative data in the archive enabled us to recode, which enabled us to address new questions.”

Today aged 79, Glen Elder says: “One of the most noted observations of my career is the centrality of resilience in difficult times. Vulnerability and inequality are a cumulative process, but there are always ways out.” The same concept applies to himself. Outside the lecture room, he confesses: "I became a widow after 45 years of happy marriage. Three years later I met Sandy, and she brought light back in my life. I would never have expected such a miracle."

On April 7 2020, Dinah Gross brilliantly defended her thesis entitled "How gender and class norms shape our worldview: Occupational representations of teenagers in Switzerland" at the University of Lausanne. This work focused on adolescents' representations of professions in terms of gender and prestige.

The DIAL Summer School 2020 will take place August 17-19 2020 at the University of Turku in Finland. A call for papers has been launched within this framework.

Considering the evolution of the situation related to COVID-19, LIVES administrative and research staff will continue its activities teleworking until the end of April.