18.12.2013 > From principles to practice: Gender awareness sessions a great success 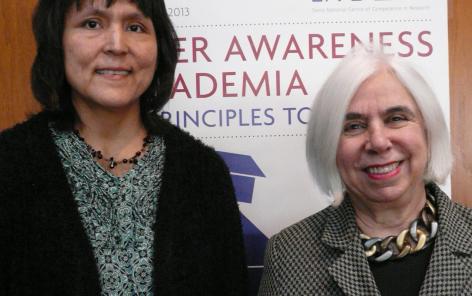 From principles to practice: Gender awareness sessions a great success

Virginia Valian, Professor of Psychology at the Hunter College of New York, and Denise Sekaquaptewa, Professor of Psychology at the University of Michigan in Ann Arbor, were guests at the universities of Geneva and Lausanne from November 27 to 29, 2013. Their mission: to provide tools for promoting equality to the hierarchies of both institutions and to other relevant environments. This initiative of the Swiss National Centre of Competence in Research LIVES and the universities' equality offices is now also available in audio format.

Geneva airport, Monday morning, November 25. We are waiting for Virginia Valian, ready to hold up a small name sign. Suddenly a little lady in a long dark coat appears, pulling a suitcase on rollers. Based on the photo, it looks like her: But there's no time to hold up the sign — we have to catch up quickly. Despite her jetlag, this experienced researcher is already asking questions. A bit of rest in her hotel, and in the late morning, we start linking questions with answers.

This psychology professor has not come just to say what she knows. She comes to share knowledge, to exchange, but also to understand how the advancement of women works in Switzerland, in our institutions. We talk statistics, advancement stages in university careers, the Federal Equality Program, research, and equality action plans. She very quickly understands the complexity of our system. Always very curious, and above all, wishing to connect with her audience, she asks exactly who will be attending the first workshop scheduled in two day's time. She returns to her hotel with a pile of notes and documents to sift through.

On Tuesday November 26, it's Denise Sekaquaptewa who deplanes. Tall, thin, very composed; she also observes and asks questions. We go see the meeting room, prepare the next day's session, and talk about organization of the space, as well as about equality... They leave to put the finishing touches on their presentations.

Wednesday, November 27, 1:15 p.m., is zero hour in room 408 of the Uni Dufour building at the University of Geneva. Twenty-seven people are there: The entire chancellor's office, the deans or their representatives, some professors, including the co-director and some researchers from the NCCR LIVES, as well as some members of the intermediary staff, were all immersed in the subject.

The two speakers depict numerous examples in several research studies on perceptions of gender differences, as well as from their own experience promoting equality. The participants ask plenty of questions, and discuss a lot during their group work.

The next day, at the University of Lausanne (UNIL), in the Château de Dorigny room, 31 people answered the same call: a dean, many professors, including the director and vice director of the NCCR LIVES, and other members of the research centre. Once again, questions burst forth, and the morning is very interactive.

That evening, after a very enthusiastic introduction by the rector of UNIL and the vice -rector for Junior Faculty Development and Diversity – also a member of LIVES – Virginia Valian addresses a larger audience, the vast majority of them women. Her talk has the same title as her bestseller released in 1998: "Why So Slow?"…

Finally, on Friday, November 29, still at Lausanne, it's time for the train-the-trainer workshop, led by the two US researchers. It was attended by 40 participants from all over Switzerland who are involved in equal opportunity programs at the university, federal or cantonal level. Tips are exchanged and contacts are cemented.

During this meeting, Denise Sekaquaptewa clarifies the style of working at the University of Michigan in Ann Arbor. For example, she mentions the Stride Committee of the ADVANCE program, made up of a dozen members from all departments, the department administrations, deans and other professors asked to serve on nomination committees. «We all had some previous commitment, but what we realized when we got together and started actually looking at the data and learning together, was that we didn’t understand, we didn’t really know what was going on, we really were quite naïve…»

What is the takeaway?

The two researchers reject some of the common explanations as to why women's careers stall.

Virginia Valian brings up the issue of "schemas", which she prefers to the term "stereotype", because it is a broader concept. Experimental studies prove that women themselves undervalue other women and pass negative judgments on those who stand out. Psychology also underscores that those who deny the existence of inequalities are also more likely to have a negative opinion of women's competencies.

According to Denise Sekaquaptewa, “Research also shows that we all – regardless of the social group we belong to - perceive and treat people differently based on their social groups (race/ethnicity, gender, sexual orientation, disability, etc.). We are all subject to unconscious bias.” That is why women, as members of a minority, are observed more, perceived as different, and confined to conventional roles.

That is how small streams form large oceans of injustice: Fast accumulation of advantages allows men to progress faster in their careers, while women accumulate penalties.

Both researchers believe that it is not stressed enough that mixed work teams succeed better. These advantages cannot be mentioned enough, and hierarchies must truly provide an impetus.

“We don’t have to feel guilty about gender schemes. We all have them (…) But we do have to take responsibility for change”, Virginia Valian proclaimed during her public talk, inviting male university staff to change some habits: Look at women when they speak, invite more women to give keynote lectures, and nominate them more often for awards. As for institutional administrations, keep data and setting up task force can already do plenty to advance awareness beyond simple goodwill.

Brigitte Mantilleri, Equal Opportunity Officer at the University of Geneva
(with EMC)