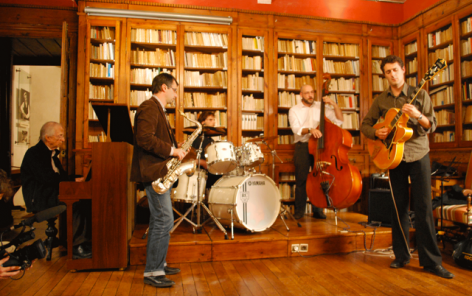 "Ordinary musicians": a job category, which UNIL listens to

Marc Perrenoud, a senior lecturer, researcher at the NCCR LIVES, and two assistants are conducting a qualitative study of "workday" musicians in Switzerland: people who are more familiar with insecurity than fame, and who are in practice more artisans than artists.

In the musical pecking order, there are performers with top billing whose sounds people pay to listen to reverently. Then, below, there is a whole range of musicians people listen to randomly at a trendy bar or a festival, or to whom they lend just half an ear in a restaurant or on a street corner. "We do not listen in the same way to different types of musicians, depending on whether we consider them artists, partners in an event or just auxiliary staff in the background. This typology is much more significant to the musician's status than the type of music they play," explains Marc Perrenoud, sociologist and researcher for project No. 6 at the LIVES National Center of Competence in Research: "Vulnerability at the Interface of Professional and Family Life: Gender and Occupational Differentials".

Since September 2012, assisted by two students working on their master's degrees, Frédérique Leresche and Jérôme Chapuis, Marc Perrenoud has been doing research in (mainly French-speaking) Switzerland on the musicians who struggle to live off their talents. Between the three of them, they have already conducted about 50 semi-structured interviews with musicians of all styles, members of a semi-professional group, tea-dance entertainers and street players.

The researchers are musicians themselves

All three researchers have a strong connection to music and the musical scene: Marc Perrenoud himself plays double bass and electric bass; while doing his master's and doctorate in France, he played about 600 times in very different public contexts, from Manouche jazz groups, to bebop and funk, to electronic post-rock. "My interests as an ethnographer overlapped those as a musician while diversifying and expanding employment options, all of which became research fields," he says.

In Switzerland, initial findings show that most ordinary musicians have a job on the side, often as music teachers, and some benefit from subsidies for their performances, thanks to the creation of associations of which they become employees or beneficiaries. This situation contrasts with that in France, where ordinary musicians are entitled to the special unemployment allowances available for entertainment workers, or in the United States, where they often split their time between the musical scene and a job outside of music just to put food on the table. Music education doesn't have the same importance in these countries as it does in Switzerland, where 20 percent of the population plays an instrument, compared to an average of 8 percent elsewhere, thus offering an almost natural opportunity for music professionals.

To be or not to be a professional musician

Living entirely from their passion, performing a range of tasks that include teaching - does this make musicians more legitimate? "Some of them seem to think so. But they could also be seen as similar to sports or art teachers, whose profession is different from those of athletes or visual artists," says Perrenoud. "We're still defining the scope of our subject, a basic scientific attitude that is too often neglected. It is all the more necessary in our case, because we are starting without a predefined list, with no filter created by others, since it is still virgin territory," he says. "In any case, we're adopting an interactionist approach, by working in the field, and we define musicians as those whose peers say they are. In France, I noticed that ordinary musicians tend to portray themselves as artisans rather than as artists. This is mainly due to their relationship with musical creation. If you're unknown, you're more often hired to play cover versions than your own music. This tension between art and profession necessarily makes them "lower-level" artists. But in Switzerland, the situation might be different, because they are less exposed to the pressure of playing music sets just to put food on the table..."

On the other hand, in Switzerland, the musical scene is small-scale and fragmented by cultural regionalism and local subsidies. "If you're known in Bulle, that doesn't mean you'll get a break in Biel. Whereas, in France it is possible to make a local musical career, because there are several large cities where ordinary musicians can play up to 100 times a year within a range of 200 kilometers, with a pool of one million inhabitants."

In several months, once this qualitative study is over, the researchers don't rule out taking a quantitative approach. "That's on the back burner," says Marc Perrenoud, already satisfied by being able to pursue his favorite research subject at LIVES: "We're following careers, which calls for a longitudinal perspective. As for the question of vulnerability, it's not only connected to the economic insecurity that ordinary musicians suffer. We also study it as a process of disaffiliation that can appear in any environment, even one that's economically favorable, as is the case in other IP6 studies of elites, for example. The basic question is why do some people do better than others, what resources are involved..." A well-known tune at LIVES.

As part of the LINES/LIVES research seminars of spring 2020 : "Parcours de vie et inégalités", Vanessa Gash will give a presentation entitled : "The partner pay gap - associations between spouses’ relative earnings and life satisfaction among couples in the UK".