08.09.2014 > New publication brings together "big names in the small field" of a promising method 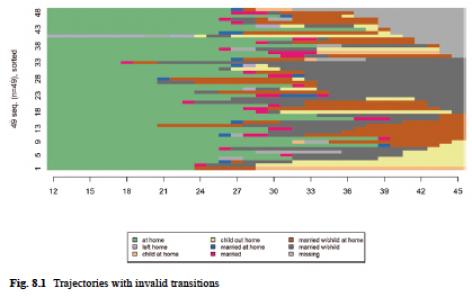 The Lake Geneva region has become crucial in the development of sequence analysis, a method that is currently enjoying rapid growth in the social sciences. Researchers from the National Centre of Competence in Research LIVES at the universities of Lausanne and Geneva who specialise in life course research are among the key players in sequence analysis development. Their latest advances have been brought together in a new book edited by Philippe Blanchard, Felix Bühlmann and Jacques-Antoine Gauthier and published by Springer.

Why are some people likely to find themselves in a situation of vulnerability while others are not? Until a few years ago, social scientists were unable to answer this question, because the only models they had were synchronic ones, which looked at individuals at a specific moment in time and did not allow a longitudinal perspective. The development of life course studies, which are, by definition, diachronic and interdisciplinary in nature, led to an increased interest in processes. Such studies largely borrowed methods from the "hard" sciences, particularly genetic biology and bioinformatics, to represent sequences of states and events statistically.

Sequence analysis thus allows researchers to construct typologies of individual trajectories concerning topics such as family configurations, professional careers and employability, major life transitions such as entering adulthood, parenthood, and retirement as well as trajectories for migration, health and ageing. This method has also spread beyond the field of sociology and is used for research in the areas of developmental psychology, history, demographics and political science.

The different applications of sequence analysis have now become the subject of a book, which is based on a joint editorial project by the universities of Lausanne and Geneva. Advances in Sequence Analysis: Theory, Method, Applications is the second volume in a series published by Springer on life course and social policy research. The series is being supervised by the three members of the NCCR LIVES board of directors: Dario Spini, Michel Oris and Laura Bernardi.

A project born between Lausanne and Geneva

In 2012 the Lausanne conference on sequence analysis (LaCOSA) was held in Lausanne, bringing together around thirty individuals from around the world who were experienced in using this method. They included renowned researchers such as Cees Elzinga, Brendan Halpin and Anette Fasang. The conference was organised by Philippe Blanchard from the Institute of Political and International Studies and Felix Bühlmann and Jacques-Antoine Gauthier from the Institute of Social Sciences, both members of the National Centre of Competence in Research LIVES. A third of the participants and several speakers were also linked to LIVES, notably Professor Gilbert Ritschard’s team from the University of Geneva, who developed the sequence analysis tool TraMineR, which provides a genuine benchmark for specialists.

"Compared to other methods, sequence analysis is used by a relatively small community," explains Felix Bühlmann. "That is how we managed to persuade big names in this small field to attend the conference and then contribute to a joint publication."

"This book’s strength is based on an apparent weakness: the method and the thematic areas described are rarely mentioned in scientific journals because such publications require a certain format that is not very compatible with the conceptual and visual innovations provided by sequence analysis," says Felix Bühlmann.

For Jacques-Antoine Gautier, "the diversity of the contributions in this book brings about a more assertive methodological community and provides a space for original reflection on the nature of sequence analysis and its place in the social sciences."

At the NCCR LIVES, several studies on different groups of vulnerable people are based on sequence analysis, since it makes it possible to reduce the complexity of individual trajectories and increase the readability of stages and transitions that shape life courses.

Meanwhile, this method is continuing to make waves: the leading sequence analysis specialists at LIVES will share their knowledge with researchers from around the world at a methodological workshop on 8 October 2014. The event will precede the annual conference of the Society for Longitudinal and Life Course Studies (SLLS), which will be held at the University of Lausanne this year.