27.09.2012 > LIVES contribution to a major conference on family evolution 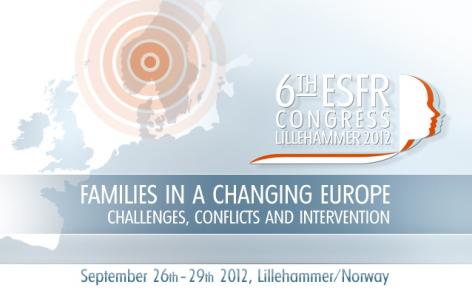 LIVES contribution to a major conference on family evolution

From 26 to 29 September 2012 in Norway, more than 150 European research projects are being presented in Lillehammer, which is an opportunity for junior and senior researchers of the NCCR LIVES to be challenged by their peers.

How do mothers pass their representations of motherhood on their daughters and thus impact their fertility?
What is the relationship between family configurations experienced in childhood and the kind of personal relations in adulthood?
Why do intentions of couples with an egalitarian vision of task sharing not always meet their practices after the birth of a first child?
Does the granting of paternity leave influence the representations and practices of their beneficiaries and lead to greater involvement in the role of father?

As many questions raised by members of the NCCR LIVES as well as young researchers affiliated to its Doctoral Program at the 6th Congress of the European Society on Family Relations (ESFR), from 26 to 29 September 2012 in Lillehammer, Norway.

Three doctoral students are speakers: Gaëlle Aeby presents "The influence of family trajectories on personal networks", a research based on a sample of 803 individuals belonging to two different age cohorts (1950-55 and 1970-75).

Isabel Valarino presents her thesis project on the link between a favorable work environment for fathers and their representations and practices. For this purpose, she collected quantitative and qualitative data among employees of the City of Lausanne, who benefited from paternity leave.

Nadia Girardin’s communication will focus on the differences between the intentions and practices of couples before and after the transition to parenthood, using survey data "Becoming a Parent" collected between 2005 and 2009.

Two other LIVES members are contributing to the congress: Jean-Marie Le Goff, senior lecturer at the University of Lausanne and senior researcher in three LIVES projects (IP1, IP2, IP15), will chair a session on cohabitation patterns in European countries.

Finally, a paper by Laura Bernardi, professor and vice-director of NCCR LIVES, is due to be presented at a session on fertility and the social meaning of children. This article from a qualitative study conducted in Italy between 2004 and 2006 develops the issue of transmission from mothers to daughters of normative beliefs about childbearing choices. It is linked to a forthcoming book* to be published in February 2013 comparing data obtained in France, Denmark, Norway, Sweden, Germany and Italy, representing the high and low end of European variation in fertility rates.