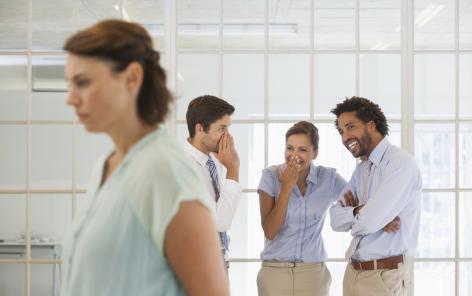 In a thesis by publication Claire Johnston provides significant advances in the field of psychology about what helps or prevents people to get satisfaction in their job. Her work has been approved by several outstanding journals. One piece presents evidence of subtle forms of discrimination in Switzerland targeting more German and French employees, perceived as highly competitive, than immigrants from Southern Europe who seem warmer and less challenging.

Claire Johnston’s proficiency struck the audience when she defended her PhD dissertation on May 26, 2015 at the University of Lausanne. Jury members praised the quality of the publications linked to her thesis, which was developed in the framework of the Swiss National Centre of Competence in Research LIVES. One paper is still under revision in the Journal of Organizational Behavior, whereas three articles appeared in the Journal of Vocational Behavior, one in the Journal of Career Development, and one in Cultural Diversity & Ethnic Minority Psychology.

In the latter she shows, along with her co-authors, that French and German immigrants experience more incivility from their colleagues than immigrants of other nationalities. This subtle interpersonal form of discrimination encompasses hostile behaviours such as interrupting, ignoring or using a condescending tone. Other recent research had already observed that Swiss people perceive immigrants from immediate neighbour countries as highly competent but less likeable. Claire Johnston’s findings prove with figures that the concerned individuals resent this animosity.

From a sample consisting of 1661 employees, of which 18% were immigrants (among whom 43.4% came from France or Germany), people from Western Europe reported significantly higher scores of experienced incivilities than people from Southern and Eastern Europe. As a matter of fact, immigrants from Portugal or the Balkans with lower education level and lower status position did not complain about incivility more than the Swiss nationals did.

Highly skilled foreigners from neighbouring countries “are believed to integrate easily into the host country and labour market, and hence tend to be forgotten when designing measures to combat discrimination against immigrants”, notes the psychologist in her article.

This finding is not the only one of Claire Johnston’s thesis. In the context of an increasingly complex labour market with growing job insecurity, demand for flexibility and decreasing long-term positions, she scrutinised different individual and professional characteristics and their relations to general and work-related well-being.

To do so she used many inputs from psychology like measures of personality and life satisfaction, as well as concepts like belief in a just world and organisational justice. Her data came from a representative sample of about 2000 residents in Switzerland, 94% employed and 6% unemployed, which were collected within a 7-wave longitudinal study on career paths conducted by the NCCR LIVES IP207. Only the two first waves (2012 and 2013) are included in Claire Johnston’s analysis.

Claire Johnston notably elaborates on the concept of career adapt-ability, which is characterised by concern, control, curiosity, and confidence. It has already been shown that good levels of adapt-ability improve work engagement, job satisfaction, job search strategies, job tenure, and self-rated career performance.

The young psychologist contributed to methodological advances in measuring career adapt-ability and its relations to happiness and work stress. With IP207 team she validated a French and a German version of a career adapt-ability scale in order to use it in the Swiss context.

Claire Johnston’s thesis confirmed previous counter-intuitive research, that job search episodes may enhance adapt-ability resources: unemployed participants actually reported higher scores on career adapt-ability. This effect does not appear however for people with high job insecurity, who face “a more stressful and demanding professional context in which it is more difficult to activate and trigger the resources,” she notes.

It remains to be tested whether the adapt-ability of job seekers stays elevated in the long term or if there is only a limited “critical window” of time in which individuals have a higher chance to find employment. The researcher also suggests that interventions aimed at developing career adaptability should be designed and tested.

Having got her doctoral degree seven months ahead of the end of her contract, Claire Johnston will certainly use the remaining time to dig further. Work Psychology has much to gain from such a professional and adaptable researcher. Her competence should in fact frighten many, but as she is from South Africa and highly likeable, all is forgiven.

>> Johnston, Claire (2015). The contribution of individual and professional characteristics to general and work-related well-being. Supervised by Jérôme Rossier and Franciska Krings. University of Lausanne.