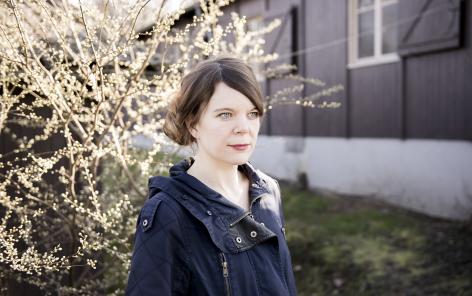 The photographer from Vaud presents her series Bois des Frères [Brothers' Wood], about the inhabitants of the former seasonal workers' huts in the Geneva suburb in a twofold project – an exhibition and a book; a collaborative project with the National Centre of Competence in Research LIVES and the Biel/Bienne Festival of Photography.

Delphine Schacher's house, nestled in a valley just outside Begnins and adjoining the family sawmill, belonged to her grandparents. The photographer, born in 1981, has her roots in the region. This is where she took her first pictures, before even graduating from the Vevey School of photography. As one of the three prize-winners of the invitation-based competition launched by the NCCR LIVES with the theme "Vulnerability and Resilience", her photographs will be exhibited from 29 April to 22 May 2016 at the Biel/Bienne Festival of Photography. The photos also illustrate the book Downs and Ups associated with the project.

Delphine Schacher first received recognition for her work entitled Petite Robe de Fête [Little Party Dress], which portrayed young Romanian teenage girls in their Sunday best in a pastoral setting. It was a journey back in time – defying time too, as initially she went looking for people photographed by her father 20 years before, on a trip marking the twinning of their town with a Romanian village. "It was the first time my father travelled so far, and the first time I saw him cry. He was so moved by the people and their difficult living conditions," she tells. She, who ironically describes herself as "a modern-day explorer from the easyJet generation, hopping on an off planes so easily".

For the Biel LIVES project, she took her camera to the huts previously used to lodge seasonal workers, close to the Lignon housing estate, near the Cointrin airport. This precarious and dilapidated housing is still in use today. Now it is home to men with varying life stories. She spent time getting close to these men, and magnified their modesty and dignity. Interview.

How did you get into photography?

It all started when I was about 20. I am one of three children, and I was the only one without an artistic activity. My brother played the drums and my sister played the flute. As for me, I spent my teenage years partying while studying for an apprenticeship in business and a vocational Matura. But I didn't imagine I would do that all my life. I was looking for something more creative. So I started taking evening courses, first in sewing, then graphic design. But I wasn't convinced. Then I realised I liked collecting photos from newspapers. So I enrolled in a photography course in the area, and I was hooked immediately. We had to do photo reports. I enjoyed meeting people and entering places which would have been inaccessible without the photography alibi. The theme for my first report and exhibition for the course was "A night in the life of...". I chose to follow an employee who worked on a rotary press at the newspaper, Journal de la Côte. I loved feeling out of my element, that I had to make my own way. What's more, the press operator liked the photos and was pleased. So I continued in that direction and registered with the Focale club, which organises workshops. I had two months to work on the theme of "Shadows". Thanks to a socio-cultural worker who had set up a photo lab in the Lonay prison, I was able to follow jailed women. And there again I enjoyed accessing to invisible places.

Where did the inspiration for the Lignon huts idea come from?

It's a subject that I've had in mind for a long time. In 2010 I had to work on a project with the theme "Periphery" for Focale. I remembered having seen a television report about the workers' huts at the airport being destroyed. So I called the Unia union to find out if there were any remaining. That's when I found out about the Lignon site. Then, when I was studying photography at Vevey, I went back there. The place hadn't changed, but I felt like I'd worked too hastily, that I had missed the heart of the subject. I had taken a few portraits but I hadn't talked with the people. This time I was able to go into their homes. I took a step closer to them, not only physically, but emotionally. I dared to go further, looking for postures. I thought more carefully about how to create a scene. It helped that I had a mandate, that there were expectations. The theme "Vulnerability and Resilience" also guided my choices. I wanted to portray the men living in those huts – pay tribute to them. They aren't just people passing through.

How did you go about it?

I spent July and August 2015 observing. In some cases, I had already met them before. Then from September to December, I went on-site two to three times each week, sometimes during the day, sometimes in the evening. I didn't always take photos. Sometimes I just spent time with them. I wanted to feel the seasons passing, but I didn't want it to be clear which year it was. I prefer when it's not clear whether the photos were taken in the 70s, or the 90s, or now. That's why I avoided showing clothes with brands or shopping bags. The place is ageless! I also tried to give a pictorial theme to some of the images, certain attitudes... I shot 25 rolls of analogue film. It's a technique which makes you take your time, arrange things.

What's a good photo in your opinion?

First of all, the light has to be natural. There has to be something going on, something mysterious or disturbing: for example, a strange object, or a fragile position.

Which of the images do you think shows the most resilience?

I like the photo with the sausage grill in the shared kitchen. It shows people making do, managing with little room. They live like everyone else, but in a smaller space. And there is the portrait, taken in an instant, of Augusto in his snappy clothes with his frying pan. It's the image of a man who has bounced back. It seems to say, "I don't have a kitchen, but that doesn't stop me living a normal life and wearing a smart shirt." These people live with the bare minimum, but they are not despairing. That said, this is clearly not an objective description. I didn't see everyone, and some didn't want to be photographed. Perhaps it's much harder for them. But there are also beautiful examples of resilience. Such as José who is from Cap-Vert: he is one of my favourites – one of the first people I talked with in 2010. He barely spoke French then, and now he's found a job. He is manager in a scaffolding company. Scaffolding is his passion – a whole world. He showed me photos on his phone. I can tell you, since then I haven't seen scaffolding in the same way! Finally, there are those pictures featuring cats and caged birds. That may suggest confinement in confinement. But it also shows that people need someone to look after...