06.03.2015 > Is active ageing an attainable ideal for the underprivileged? 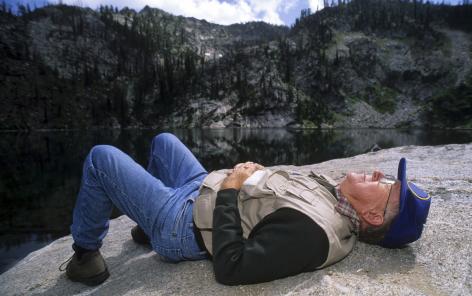 Is active ageing an attainable ideal for the underprivileged?

In her doctoral thesis defended on 26 February 2015 within the National Centre of Competence in Research LIVES (NCCR LIVES) at the University of Geneva, Laure Kaeser deals with "the contemporary norms of ageing through the lens of a life course perspective", taking elderly economic migrants as case study. Following a fascinating investigation into the interplay between migrant trajectories and the host country’s retirement policy, she recommends taking into account the range of different forms of ageing and calls for democratising access to resources.

Senior citizens in Switzerland may also be migrants. This fact has not escaped the notice of the research team involved in the Vivre-Leben-Vivere (VLV; English: Living) study carried out by the Centre for the Interdisciplinary Study of Gerontology and Vulnerability (acronym CIGEV in French) at the University of Geneva. The NCCR LIVES is supporting the study, in which several doctoral students are involved.

Due to their age, background and socio-economic status, low-skilled foreign nationals aged over 65 are difficult to reach, still fairly unfamiliar to researchers and largely overlooked in social policy-making. For this reason, the VLV study collected data on 365 retired people in Basel and Geneva who were natives from Italy, Spain and Portugal – the three main countries of origin of former immigrant workers in sectors such as construction, manufacturing and cleaning. Laure Kaeser chose to base her work on this sample, drawn from a wider set of 3,600 respondents surveyed in the VLV project.

An ambivalent and normative concept

The young sociologist observes how gerontology on the one hand and the policies of the modern welfare state on the other play a part in helping to construct and promote the 'active ageing' model, based on the notion that older people enjoy a better quality of life and cost the state less if they remain empowered. However, she notes that this concept is ambivalent and has a normative aspect to it. She considers whether the idea of 'ageing well', conveyed by the image of 'active senior citizens', excludes people whose individual life course has not allowed them to amass the necessary resources. By encouraging older people to work longer, keep themselves physically and mentally fit, maintain their networks and make themselves useful, this discourse risks contributing to the further marginalisation of the most vulnerable and least integrated. And as a matter of fact, the data gathered by the VLV project clearly show that migrants are overrepresented among those at the bottom of the scale in terms of health, material resources and education.

By studying the data from the life course perspective Laure Kaeser has been able to link migratory, occupational, family and health trajectories and analyse their interplay with the institutional reality of the host country. It has led her to examine the weight of the historical and social context on these lifes (e.g. how episodes of xenophobia have left their mark…), the timing of the immigration process and the way in which social values and norms have been internalised (or not, as the case may be) by individuals caught between different reference frameworks. Laure Kaeser’s research thus shows that the notion of active ageing has strong ethnocentric connotations and is most applicable to those who are most privileged culturally, socially and economically. And since relationships of power play a role here, the author also examines questions concerning the articulation of background and age with gender. She thus observes significant differences between men and women in terms of this generation’s limitations and opportunities.

"Why would a man spend all day in front of the television instead of getting out and about ? Is he tired ? ill ? isolated? Conversely, is the one who prefers to do DIY or go to the pub trying to occupy his time or is it because he feels that his wife wants him 'out from under her feet'? And would he choose to spend his time like this if he had the means to travel? Does it make sense to encourage migrants to go hiking if it is something they never did before they retired?", questioned Laure Kaeser during an interview a few days before her thesis defence, in order to point out some of the stereotypes surrounding migrant activity vs. inactivity.

One of the merits of her dissertation is in the conclusion, where she reflects on the role and responsibilities of academia. She devoted a whole chapter to the difficulties encountered by the VLV team when trying to recruit participants with a migrant background. These problems are of great significance in this line of questioning, since many migrants tended to mistrust the people collecting data for the study, associating them with state officials. Indeed, the author admits that there is a risk that research could be instrumentalised and used to produce prescriptive guidelines. It is a slippery slope from a holistic concept of active ageing to a productivist one that aims only to save money.

Laure Kaeser states that she took the approach of a researcher actively involved in society, concerned to "bring scientific progress into the public debate" and to give "a voice to people who have no voice", particularly via discursive spaces that include all senior citizens.

At the end of her thesis, she sets out several approaches to overcoming the ambivalence in the active ageing model – something that is supposed to be empowering but is actually restrictive. Several of them involve ideas which have already been put forward elsewhere, favouring a more egalitarian pension system. Above all, she calls for "democratic ageing that allows for different forms of ageing and has as its social ideal the democratisation of access to economic, cultural and social capital throughout the entire life course."

Her thesis ends with the following phrase: "The strength of a people is measured by the wellbeing of its weakest members." This a return to fundamental values, since this powerful idea is nothing less than the preamble to the Swiss Constitution.

At Laure Kaeser’s thesis defence, the jury members noted her "deep commitment to her work, her ability to take into account criticism in order to improve her conclusion, the talent with which she defended her views and her aptitude for bringing about collaborations," reports Prof. Michel Oris, one of her supervisors.

This research has, in fact, enabled Laure Kaeser to really make the most of the LIVES network. This can be seen in the way in which she has built on the collaborative effort that comprised the VLV study, in her theoretical construct that makes way for a certain interdisciplinarity and, above all, in the fact that she has co-written several articles with other young researchers, benefiting from their theoretical and methodological skills, as she underlined.

Having earned a DAS (Diploma of Advanced Studies) in public administration alongside her doctorate, Laure Kaeser is now well-equipped to commit herself in society. A month ago she began an exploratory study for the Canton of Vaud regarding the trajectories of people on social benefits.